Ubud is a resting place in Gianyar regency, Bali, Indonesia.
Ubud Village supervises 13 (thirteen) train service consisting of 6 (six), traditional villages, including the district of Ubud, Gianyar regency with a distance of 20 km from the city of Denpasar and amidst the emerald green ricefields in the stunnning central balinese foothills, Ubud village used to be the center for medicinal sources. Ubud can be reached within 30 minutes or 15 minutes from Gianyar. In 1920s and 30s, along with the coming of foreign artists, it was booming into a Bali;s prominent art center where greatest artworks were created through the fine brush of talented artists.

Famous for its painter’s community, Ubud is special in more ways than one. It has its own magic, and its particularly beautiful surroundings and gracious way of life have drawn celebrities and artists from all over the world in recent decades; some have even adopted Ubud as their own home.

The magic is easy to find – just take a walk south of the village through its terraced paddy fields to the monkey forest. Fresh water spouts out of the sheer rock at the base of the ravine, and a bath in a secluded, shady spot is purifying. 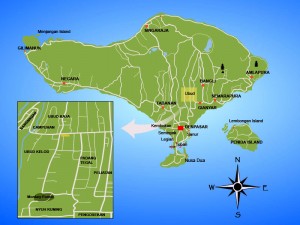 Where is Ubud, Bali

With a height of about 300 meters above sea level, Ubud has a cooler air from the plains region south of the original Balinese. Village of Ubud has a population of about 9800 inhabitants. With an unspoiled environment, this area is a popular source of inspiration for artists, including artists overseas, mainly European artists. 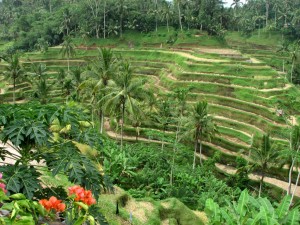 Ubud besides the beautiful nature, this area is also a village with a rich cultural heritage of great artists, especially the famous painter, for instance, I Gusti Nyoman Lempad (1862-1978), Anak Agung Gde Sobrat (1919-1992), I Gusti Made Deblog (1910-1986), later followed by others like, I Gusti Ketut Kobot, Ida Bagus Made, Dewa Putu Bedil, Ida Bagus Rai and others. Fame of the painters mentioned above come to inspire artists to reside in a village west of Ubud.

Around the 1920s, two European painters from the Netherlands, Rudolf Bonnet and Walter Spies, a German carve a new historical development of painting in Ubud area. Both these European painters introduced the technique of European aesthetics, especially in the areas of lighting, shadows, perspective and anatomy. The local painters to absorb the new techniques in accordance with the basic values and local mind while taking the traditional themes so as to give a separate identity with a name, or Style Ubud Ubud style.

Ubud Village became famous as the birth of the artist painting the area thanks to the cooperation between Tjokordo Gde Agung Sukawati with Rudolf Bonnet to form an association of artists with the name of Pita Maha, which also led to the birth of Pita Maha is Gde Raka Sukawati Tjokordo, I Nyoman Gisti Lempad on 1936. Pita Maha is a gathering and a place to discuss issues and developments in painting, as well as to exchange ideas and introduce the art they own.
In its development and then, on the initiative of Ida Tjokordo Gde Agung Sukawati, supported by Rudolf Bonnet, a painter born in the Netherlands and also local artists are planning to establish a museum. Yayasan Ratna Wartha previously established given the task to implement the development and management of the museum. In the year 1945 began construction of the museum which lay the first stone by Prime Minister Ali Sustroamidjoyo. In the past two years, precisely in 1956 the museum was opened by the Minister of Education and Culture Mr.Moh.Yamin 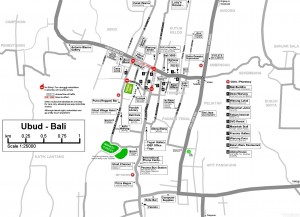 As a tourist destination, Ubud has many objects that appeal to tourists, both domestic and foreign. Some of these objects is the Puri Saren, which is located in Ubud, the traditional art market, Monkey Forest (Wenara Wana) and museums.