Aceh, at the northwestern end of Sumatra, was the first are in Indonesia to have significant contact with the outside world. Chinese chronicles of the sixth century speak of a kingdom called Po-Li on the northern tip of what is now Sumatra. In the 9th century, Arabic and Indian writings mention Aceh as an important trade center. The first Islamic Kingdom in Indonesia was established in 1804 in Aceh, and the region’s position as an Islamic stronghold grew as the city became a center for Islamic learning and the gateway for Indonesians making the pilgrimage to Mecca. Over the centuries, a constant influx of traders and immigrants establishes Aceh as a wealthy and influential trading nation, possessing a strong sense of independence. Aceh’s dominace in trade and politics reached its speak in the early 1600’s.

Aceh’s decline began with the death of Sultan Iskandar Thani in 1641, when the British and the Dutch began to battle for control of the region. The London Treaty of 1824 gave the Dutch control of all British possessions in Sumatra, in return for their withdrawal from India and Singapore. The Acehnese are famous throughout Indonesia for their courage and fierce sense of Independence, and the Dutch lost over 10.000 men during the Aceh Wars, which lasted from 1873 to 1942.

Although industrialization and global communications have created a greater openness to western ideas and practices, visitors should keep in mind that the Acehnese take their religion, their manners and their morals very seriously.

Places of interest in Aceh


Baiturrahman Grand Mosque
Sitting in a vast expanse of green fields, the whitewashed walls and minarets, and charcoal balks domes of the Grand Mosque are the stairs in one of the minaret for a fantastic view of the city. 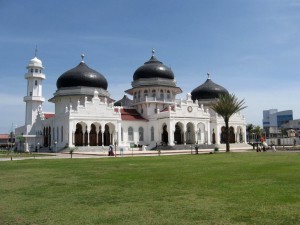 Negeri Museum
The museum has 3 floors filled with antique weapons, gold jewelry, ceremonial costumes and household furnishing. The “Rumah Aceh” is an excellent example of traditional architecture, built completely without nails, being held together by cord and pegs. Among the exhibits is a huge cast-iron bell, a gift from the emperor of China and brought to Aceh by the famed Admiral Cheng Ho in 1414.

Gunongan
Sultan Iskandar Muda (1607-36) erected Gunongan, as a private playground and bathing place for his wife. This whimsical architectural fantasy has access to the sultan’s palace through the traditional “Pintu Aceh”, used by royalty only.

Kerkhof
The cemetery here holds the remains of over 2,000 Dutch, Eurasian, Javanese and Ambonese soldiers who died fighting in the Aceh wars.

The Syiah Kuala Grave
Teungku Syiah Kuala was one of Aceh’s great Moslem Ulama’s and his grave is a shrine for local visitors and Muslims from Indonesia and Malaysia. It stands near the mouth of Krueng Aceh River, about 2-kilometer from the city.

Beaches of Aceh
Lhok Nga is a great beach for picnicking. Ujung Bate is a black sand beach nice for walking and collecting seashells. For swimming the best is the exquisite white sand beach at Lampu’uk. Remember to dress appropriately, local women swim fully clothed.

Sea Gardens
Pulau We, (we Island), is a dramatic island of dense jungle, high hilltop views, palm-lined beaches and mysterious rocky coves. There are also fresh water lake and semi-active volcanoes on the island. Neraby Pulau Rubiah is famous for its excellent coral reef and spectacular array of tropical fish. It is a great place for both snorkeling and diving.

Gunung Leuser National Park
This is one of the largest national parks in the world, containing over 800,000 hectares of virgin rainforest. The park is home to orangutan, gibbons, monkeys, elephants, tigers, and among the last of the Sumatran rhinoceros. There are research facilities for the study of primate’s, birds and insects, The Orangutans Rehabilitation Center at Bukit Lawang being the most popular with tourists. It is possible to raft the Sungai Alaas River from Ketambe to Indian Ocean on a 4-5 day expedition. Your journey takes you through exciting white-water rapids to the calmer, crocodile-infested waters of the lowlands. Basic accommodation is available at Ketambe. 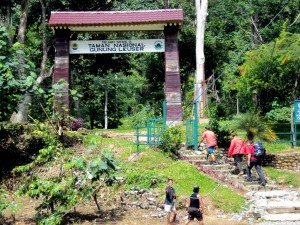 Laut Tawar Lake
Laut Tawar Lake is located in Aceh Tengah. Takengon, the capital of the region, lies on the West Side of the lake, 1,120 meters above sea level, with an average temperature of 20°C. The scenery is lovely and the area is being developed as a tourist resort with water recreation such as skiing and boating being readily available. There is excellent hiking in forests filled with exotic orchids.