At this moment the Ngurah Rai Airport serves up to 200 aircraft in a day, especially during peak seasons. This feat is also enhanced by the price wars (low cost carriers) offered by airliners.

6 concealed tanks are available with a total capacity of around 20,000,000 liters.

List of companies that operate in ground handling services at the Ngurah Rai Airport.

In line with the increase in air transportation clientele, PT (Persero) Angkasa Pura I provides airport and air navigation services. As the only airport on the island of Bali, Ngurah Rai functions as the main gateway into the central and eastern areas of Indonesia.

At this moment Ngurah Rai Airport is capable of serving approx. 10 million passengers per year with an average turnover of 5,000 aircraft monthly.

Carry out the operations (management, development, and handling) of the airport and its surroundings well and innovatively, to achieve optimum benefits and results that can be used for the company’s expansion and in the end contribute towards state revenue and national development .

To become a reliable airport services company in the Asia Pacific region.

Ngurah Rai Airport, located in between the Badung Strait in the east and the Indonesian Sea in the west is located around 13 km from Denpasar, and is the only airport in Bali.

In 1949 began the construction of the terminal building and other aviation facilities. Meanwhile international flight services began in 1959 and approval from ICAO (International Civil Aviation Organization) was received in 1963.

Since 1965 until 1969 began construction of the International Terminal building and expansion of the landing strip into 45 x 2,700 meters by way of land filling into the sea as far as 1,000 meters.

The completion of this task was marked by an inaugural ceremony on Agustus 1, 1969 by then President Soeharto and at the same time changing its name to PELABUHAN UDARA INTERNATIONALNGURAH RAI  BALI or Ngurah Rai International Airport.

On Oktober 1, 1980 based on the Government Decree No.26 year 1980, the management of Ngurah Rai International Airport was passed over from the Directorate General of Air Transportations to PERUM ANGKASA PURA.

Since then the Aviation facilities (Apron, terminal building, and others) were gradually developed by PERUM ANGKASA PURA, which in 1986 based on the Government decree No. 25 year 1986 changed name to become PERUM ANGKASA PURA I. Meanwhile the Indonesian term Pelabuhan Udara was changed into BANDAR UDARA based on the Transportations Ministerial Decision No.213/HK.207/Phb-85 on September 1, 1985.

The island of Bali with its immense tourist attractions once again called upon the expansion of the Airport facilities. Ngurah Rai International Airport Expansion Project Phase I was carried out since October 1, 1989 until August 31, 1992 that covered landing strip extension to 3,000 meters, taxiway relocations, apron expansion, passenger and cargo building expansions and air navigational and aircraft fuel sharing facilities. With the issuing of the Governmental Decree No.5 year 1992 then Perum Angkasa Pura I shifted form into a PT. (Persero) ANGKASA PURA I. Company activities include aviation facilities provisions and airport services. Project Phase II was carried out February 10, 1998 and was planned for total completion June 2000.

With a size of 45 x 3,000 meters constructed of solidified concrete and asphalt, PCN 83/F/C/X/T, accommodating up to aircraft of class B 747-400 for flight durations equal to Denpasar – Tokyo without payload limits.

Some Strip – taxi  out and strip – taxi – row constructed of concrete and asphalt increases the landing strip’s capacity.

Aircraft Refueling Depot has a capacity of 6,540 kiloliters operated by Pertamina for the refueling services, by means of hydrants and mobile tanks, for both avtur and avigas fuel types.

First Aid and Emergency Units (PKP&PK) are available with fully equipped according to category 9 of ICAO standards.

Available with a capacity of 10,000 meals a day, managed by Aerowisata Catering Service.

The Domestic Terminal serves 1,372,320 passengers a year and has 28 check-in counters complete with electronic scales and a luggage conveyor .

For waiting passengers a boarding room is available with a capacity of up to 2,118 people.

The International Terminal boasts a Balinese architectural nuance, comprised of a Departure and Arrival Terminal divided by a Festival Plaza. Its capacity is up to 4,938,840 passengers a year.

The check – in room where passengers report their departures has 62 check-in counters that are equipped with electronic scales and luggage conveyors . Passengers awaiting departures make use of a waiting room and 10 Boarding gates, each equipped with aviobridges and automatic aircraft parking systems. The Boarding rooms total capacity is 3,175 passengers.

The baggage claiming room is equipped with 146 conveyors and 62 scale units.

A special waiting room is available for main class passengers both at the Domestic and International Terminals with a capacity of 1,573 passengers.

A restaurant and snack bar are available for passengers and their accompaniers through various menus.

Before entering the Boarding room passengers can shop at the Departure/Transit area where there are a number of duty free shops and some are located outside the terminal, souvenir shops, bookshops, batik shops and others.

Several state-owned and private banks and moneychangers are available.

Telephone facilities are available in the form of coin, chip , and duty free and collect call telephones .

Passengers who wish to use taxi services or rent a car may order them at the counter at the arrival Terminal.

For the passenger’s convenience there are hotel reservation counters and Bali tourism information centers.

Dances and welcoming ceremonies for special arrivals are held at the Festival Plaza located between the International Departure and Arrival Terminals.

Cargoes are served at the separately located International Cargo Building.

Aerodrome Control Tower (ADC) Comprises a control radius of 0 – 5 NM (DVOR – BALI as point 0) at altitude of 0 – 2.500 feet. Air control is carried out by means of visual object sightings.

There are 3 aviation communication facilities at the airport:

In general the navigational tools at the airport include:

The main power plant is from the PLN at 10,380 KVA reserve power sources are 15 automatic diesel generator units.

There are 750 telephone lines available for internal communications from within and outside the Airport.

Rooms in the terminal that need high levels of communication for operations/service are equipped with 78 channels.

Sewage from the terminals and other places are drained to the water treatment facility to be treated before being applicable for open drainage.

With a total capacity of 2 cubic meters/hour this facility is used for incinerating trash from the terminals and aircraft at high temperature levels minimizing pollution.

Arrival and Departure information are displayed on television screens and Flap Boards and LED displays . These are placed at public hall locations and inside the departure and arrival terminals. A PAS ( Public Address System ) is also used.

In line with the company’s visions, the demand of progress in the aviation world, and the spirit of privatization in the field of aviation in general and specifically in the airport management, therefore to anticipate this challenge PT (Persero) Angkasa Pura I Ngurah Rai Airport branch plans for expansion of its grounds and facilities in the Airport’s vicinity.

At this moment there are 4 property development plans:

In line with PT (Persero) Angkasa Pura I plans towards creating an Airport City, Ngurah Rai in cooperation with local businessmen provide a one-stop shopping feature.

For those departing, arrived or accompanying may visit Souvenir Shop, Art Shop, Book Store, Batik & Garment, Perfume, Boutique, Restaurant & Café, Massage & Spa counters all can be seen along the terminals of the Ngurah Rai Airport.

There are also 3 Duty Free Shops located within the International Departure Terminal.

In the year 2007 the total of cargo loads entering and exiting Ngurah Rai were 61,088,409 Kg. However in the years ahead it is expected that the number of cargo deliveries through Ngurah Rai can increase.

Within the Ngurah Rai Ariport area, are office and warehouse facilities for warehousing operators covering 5,772 sqm divided into 2 namely Domestic and International Cargo.

At this moment recorded are 16 forwarders and cargo agents that have opened their offices and businesses at Ngurah Rai Airport. We are still providing office spaces to be rented. For inquiries, please contact: 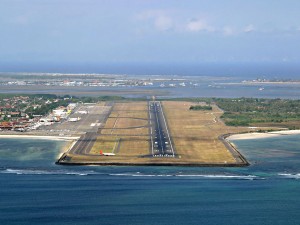