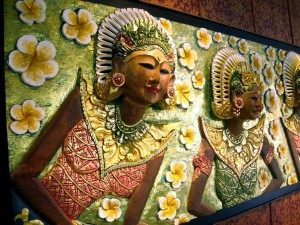 Art & Crafts is a result of human work which can be tangible or intangible. Indonesia Arts & Crafts reflect to the regional histories, relegions and influences of the archipelago’s mind-boggling array of ethnic groups. Indonesia Arts can be classified in to the three main streams within Indonesia.

Woodcarving is the most enduring and widespread medium for artistic expression in Indonesia. Each Culture has its own style, and the diversity and sophiscation of Indonesia’s woodcarvers is remarkable. In Indonesia a house not only protects its inhabitants from the elements, but repels unwanted spirits. Example include the horned Singa (lion) heads that protect Batak Houses, the water buffalo representations on toraja houses sigifying prosperity, or the serpents and magical dog carving on Dayak houses in Kalimantan. 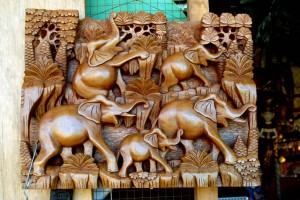 Indonesian Pottery is usually unglazed and hand worked, although the wheel is also used. It may be painted, but is often left natural. Potters around Mojokerto, close to the original Majapahit capital, still produce terracotas, but the best-knownpottery centre on Java is just outside Yogyakarta Kasongan, where intricate, large figurines and pots are produced. Lombok pottery is very fashionable and has an earthy primitive look with subtle colourings. Balinese ceramics show a stronger western influence and are more inclined to use glazing. 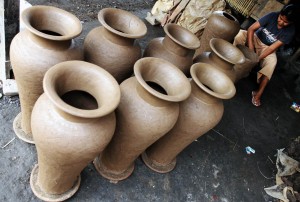 Painting is widespread in Indonesia as an accompaniment to other art forms. For example, woodcarving, masks and pottery are often painted, as are relegious items, such as calendars or relegious desigs painted. An individual painting on canvas that is an art form in itself is a modern western concept. Temple and other painting exists on java, but after the conversion to Islam, Bali became the centre for painting in Indonesia. The traditional wayang narratives were moral tales or told of the exploits of the gods. 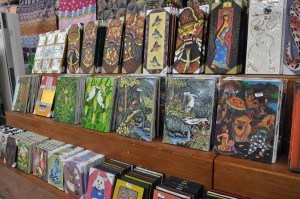 They were mostly wall paintings or decorative hangings for temples and palaces. Balinese painting was turned arround in the 1930s by westernartist such as walter Spies and Rudolf Bonnet who came to live and work on to depict scenes from everyday life rather than religious narratives, market scenes replaced the cartoon-like narratives of the Hindu epics like Ramayana. Further transformations occured with the naive “young artist” style that developed in the 1950s, and bainese painting continues to evolve with many noted modern artists producing innovative work.

Indonesia textiles come in a dazzling variety of fabrics, meterials, technique, colour and motifs. Basically there are three major textiles groupings. There, first Ikat, the indonesia word ikat, which means to tie or bind, is used as the name for intricately patterned cloth whose threads are tie-dyed by a vaer painstaking and skillful proccess before they are woven together. Ikat cloth is made in many scaterred regions of the archipelago, from Sumatera to Maluku, but it’s in Nusa Tenggara taht is ancient art form thrives most strongly. Second, Songket, Songket is silk cloth with gold or silver threads woven into it, although these days imitation silver or gold is often used. 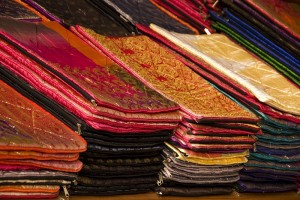 Songket is most commonly found in West Sumatera, but can be seen inparts of Kalimantan and Bali. Gold Threads is also used ini embroidery in the more islamics areas of Indonesia. Third, Batik, the development of batik in Indonesia is usually associated with the flowering of the creative art arround the rotal courts. The rise of Islam on Java probably contributed to the stylisation of batik patterns and the absence batik of representations of living things for most design. More recently batik has grown from an art mainly associated with the royal courts into an important industry with a number of noted production centres.

The Bronze age in Indonesia began with the metalworking introduced from the Dongson culture in present-day Vietnam. Bronze work peaked with the Hindu-Buddhist empires of Java and brasswork is now more commmon, but in the eastern islands ancient hourglass-shapped bronze drums are still produced. Brassware was mostly Indian and Islamic influence and fine brass vessels and ornaments are produced in Indonesia.

Some of the best workmanship is that of the Minangkabau in Sumatera, but brassware is also produced in Java, South Kalimantan and Sulawesi. The most important ironwork object are knives. As well as the famous kris, the parang of kalimantan are sacred weapons used in everything from hacking through the jungle to head-hunting. Scabbards for ceremonies parang are intricately decorated, shells and features.

Gold and silver work have long been practised in Indonesia. Some of the best gold jewellery comes from Aceh in the very north of Sumatera where fine filigree work is produced and chunky bracelets and earings are produced in the Batak lands. Gold jewellery can be found all over Indonesia and, while some interesting traditional work can be found throughout the islands, the ubiquitous toko mas (gold shop) found in every Indonesian City is mostly an investment house selling gold jewellery by weight, while design and workmanship take a back seat. The best-known jewellery is the silver of both bali and the ancient city of Kota Gede within the city boundaries of Yogyakarta. Balinese work is nearly always hands constructed and rarely involves traditional casting technique. Balinese ewellery is very innovatives, employing, traditional designs but, more often than not, adapting designs or copying from other jewellery presented by western buyers. 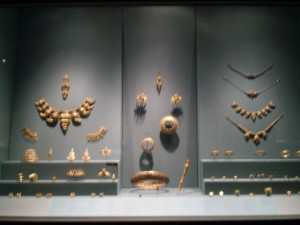 The most famous puppets of Indonesia are the carved leather wayang kulit puppets.the intricatelace figures are cut from buffalo hide with a sharp chisel-like stylus and the painted. They are produced on Bali and Java, particularly Central Java. The leaf-shaped kayon representingthe “tree” or ‘mountain of life” is used to end scenes in the wayang ans is also made of leather. Wayang Golek are the three dimensional wooden puppets found in Central Java, but are most popular among the Sundanese of West Java. The wayang klitik puppets are a rarer flat wooden puppet of East Java.

Some of the finest basketwork in Indonesia comes from Lombok. the spiral woven using this method, while smaller receptacles topped with wooden carvings are also popular. On Java, Tasikmalaya is a major cane-weaving centre, often adapting baskets and vessels to modern uses with the introduction of zips and plastic lining. The Minangkabau, centred around Bukit Tinggi, also produce interesting palm leaf bags and purses, well the lontar palm is used extensively in weaving on Timor, Roti and other outer eastern islands.

The Dayak of Kalimantan produce some superbs woven basket and string bags, and they also produce some fine beadwork which can be seen on their baby carriers. Some of the most colourful and attrative beadwork is produced by the Toraja of Sulawesi, and beadwork can be found throughout Nusa Tenggara from Lombok to Timor. Small, highly prized cowrie shells are used like beads and are found on Dayak and Lombok artefacts, though the best application of these shells is in the Sumbanese tapestries intricately beaded with shells.