What is Traditional Balinese Architecture? 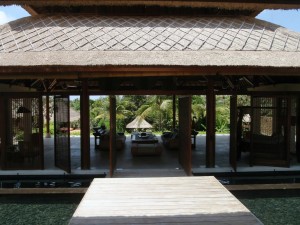 Sources of Guidance to Build a House

An old Hindu’s manuscript called Lontar Asta Kosala Kosali is the chief guide to build a proper Balinese house. There are also other manuscripts, such as Lontar Asta Bumi (containing size of land and location a good house), Lontar Asta Dewa & Lontar Wisma Karma (containing the name, shape, and function of each a building), and Lontar Dewa Tattwa (containing clearance ceremony before a house is built). In many aspects of life, those guidance books have been developed depending on the surrounding, local topography.

Based on the philosophy, a traditional Balinese house has some strength aspects. The strength points that are:

From the out side, a Balinese traditional house looks like a small castle surrounded by red brick walls. This small castle extends from north to south like a long square. A traditional Balinese house consists of nine buildings which have different function. Those building are: Sanggah/ Merajan, Meten/ Bale Daja, Bali Dangin/ Bale Gede, Bale Dauh, Sake Enem, Paon/ Pewaregan, Jineng, Angkul-angkul, and Aling-aling.

Sanggah/ Merajan is a shrine dedicated for praying to God and family ancestors. Sanggah is located in Utama area (northeast side) of the house, as told on the Tri Mandala concept. The Chinese culture seamlessly is seen in the form of two guarding statues on right and left side of entrance door, as seen in the many Chinese temples. Sanggah usually hosts historical relief which contain moral messages on the outer wall.

Meten/ Bale Daja is building for the oldest family member. Meten consist of one bedroom and a terrace. This building is located on Utama area (north side of the house), because the older family member is usually a respected priest for the family temple. In this building especially on the door and windows, you will see some peacock relief or Balinese ox. Ox is one of holy animals and used as symbol for honorable person, as also seen in the Indian culture. Meanwhile, peacock is a symbol of honorable person in Chinese culture.

Bale Dauh is a building for all family members, except the oldest, located on Madya area (west side of the house). Bale Dauh consists of several bedrooms and one terrace. Bale Dauh is usually bigger than the other. The relief of plants can be found in many parts of this building symbolizing prosperous and unity of the family unit.

Bale Dangin is an open air building in Madya area (east side), with a single wall on the back side. On the east side of this building is one big wood bed for Manusa Yadnya, a ritual ceremony dedicated for human rites aiming at cleansing the soul. The building also keeps various ceremonial equipments. On the front of the main post which props up the roof, there is a Garuda statue —it has an eagle’s head and wings, but the body is human—or a lion with two wings. Those animals are believed as the guardians from black magic, especially when the family runs a Manusa Yadnya.

Sake Enem is a building for guests. Similar to Bale Dangin, this is an open air structure with a single wall on the south side. Sake Enem also has a big wooden bed on the center. In certain part of the island, the family doesn’t build a wooden bed, so guests instead simply sit above a plaited mat on the floor. Sake Enem is located in Nista area (south side), considering that they no idea whether the guest bring good or bad auras. So if they bring bad atmosphere, it can be neutralized soon.

Jineng/Lumbung is a rice barn. This warehouse is located behind Sake Enem, near the kitchen paon. Jineng/ Lumbung is positioned higher than other buildings. It has a post on every corner that looks like a big pigeon house with a door. Usually a non-permanent wooden stair Jan/ Gerejak is provided to take collect the rice.

PAON/ PEWAREGAN
The kitchen, Paon/ Pewaregan is located on the south side of the house belonging to Nista area, because it is a place where the family keeps the equipment for slaughtering animals and cutting trees, including knife, axe, etc. Paon could also mean fire, and located so because the god of fire has the authority on south. Paon consists of two parts, the first open air section Jalikan is the true cooking area with wood fire oven. The second part is a room where food and other cooking apparatus are kept.

The traditional gate angkul-angkul is a pair of two red brick blocks in a row position with a wooden door in between. Angkul-angkul has a pyramid roof made from dry grass. Angkul-angkul is normally higher than the wall surrounding the house. On the right and left side of this gate there are guardian statues in scary expression. Often they are a male and female with both palm of hand in front of their breast. This pose is a welcoming gesture of Balinese people which is followed by saying Om Swastiastu (welcome greeting).

Balinese people are very friendly in a sense that they always welcome guests. Naturally they never close the gate. To keep their privacy, Balinese people build a small wall between Angkul-angkul (gate) and the house yard, called Aling-aling. Aling-aling makes someone outside can not see their the people inside.

Tenganan and Trunyan, a two separated traditional villages each has its own unique, different architectural design. Both villages are occupied by old Balinese origin, Bali Aga, as often compared to the recently migrating Balinese moving from Java’s Majapahit Empire in the 15th century.

Those people do not follow modern Hinduism, and moved to the inner enclosures to stay away from the ‘foreign’ influence brought by the arrival of today’s Balinese. They are Bali Aga, early inhabitants of Bali.

Bali Aga keep practicing some Megalithic culture, including their architecture design. Unlike the common nine-building concept, traditional houses in Tenganan and Trunyan consist of two main buildings only. It is a large building which consists of some bed rooms, kitchen, terrace and a family temple.

The houses and the temples people do not apply three main areas, Nista (dirty area), Mandala (neutral area), Utama (holy area), as other Balinese in general. All the bedrooms, kitchen, terrace are built in on a piece, large building. This building has less relief carves and use terracotta as cement, reflecting their megalithic ages. The village temple is built from big stones with less relief carves.