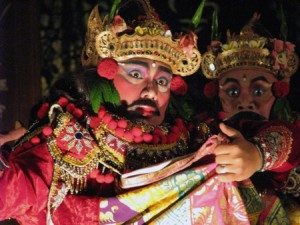 Arja
Arja is Bali’s oldest drama form, performed for the first time in 1820. The name was taken from Sanskrit, Reja, meaning ‘something beautiful’. This was due to the beautiful combination of dancing, singing, and traditional instruments used in this drama. Arja players usually don beautiful dresses decorated in gold, silver, and flowers.
Arja is performed not only for entertainment but also for education as there are many moral messages showed through this drama. Comedy, heroism, to the history of Bali can be expressed through Arja. The conversations among characters are done by using Macepat (traditional singing technique in Bali). There are three types of Arja according to the number of players and the traditional instruments used:

Prembon
Development of Arja and mask dances in Bali created a form of Drama called Prembon in 1942. Similar to Arja, this drama also shows stories from the Babad. The differences between Prembon and Arja seem from the masks used by the players. Arja players do not use masks, but in Prembon all the players wears masks. The masks aim to more explicitly express the character in Prembon, such as a king, common people, priest, etc. Though wearing masks, the Prembon players converse among them.

Sendratari
Sendratari is one of the drama forms in Bali which emerged around 1960. Like the other drama forms, Sendratari is also a combination of traditional dancing, singing, and instruments but this drama is closely associated with modern drama forms. Every scene is managed to portray clearly the characters (main character, second, antagonist, etc).
Sendratari was created by Balinese artist I Wayan Beratha, categorized as large drama because it is performed by 10-150 players. For the first time, Sendratari in Bali only told stories from the Babad but in later developments, Sendratari took every classical story in the world like Ramayana and Mahabaratha. Now, this drama can be viewed at the annual Bali Arts Festival, around June-July in Bali.

Drama Gong
Drama Gong is the youngest form of drama in Bali, estimated to emerge 6 years after Sendratari, around 1966. Drama Gong mostly brings comedy and is usually performed for entertainment. Unlike Sendratari which needs many players in luxurious dresses, Drama Gong is necessarily less in players and some use funny clothes or accessories. Drama Gong also has fewer scenes than Sendratari.
Drama Gong is performed in many social events in Bali. It has been one of the favorite shows among the Balinese. The golden era of was reached in 1980. Even as the popularity of drama slightly decreased, many groups still exist, such as: Drama Gong Bintang Bali Timur, Drama Gong Duta Budaya Bali, Drama Gong Dewan Kesenian, Drama Gong Dwipa Sancaya, etc.