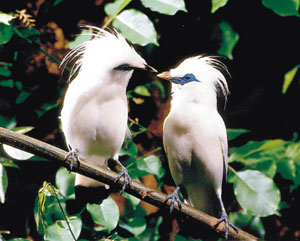 Just like common tropical islands, in Bali you will find a wide variety of plants by surprise. Huge banyan trees are everywhere in the villages by the Bale banjar or pavilion, or temples ground. Tamarind is also a typical Balinese tree mostly found in the north coast, as well as clove at the highlands. Meanwhile acacia, flame tree and mangrove can be found along the south coastlines. Craft and house use basketries, a dozen species of coconut palms and varieties of bamboos are also everywhere across the island.

Flowers families are just as surprisingly as the variety of big plants. The most common are hibiscus, bougainvillea, jasmine, and water lilies. Magnolia, frangipani, and a variety of orchids are found in many front yards and gardens, along roads, and in temple grounds. In the day to day life flowers are routinely used as decorations in temples, on statues, as offerings for the gods, and during prayers. Dancers wear blossoms in their crowns, and flowers are worn behind the ear during ceremony sessions.

Eceng Gondok
The eceng gondok (Eichornia crassipess) is a typical flower of the tropics where it grows in profusion in warm ponds and lakes. Usually discovered in large clusters, it can also be seen blossoming alone adding its accent to the clear brilliance of the surrounding water. The serene lotus plant exhibits a delicate sheen at the outer edges of its leaves. No wonder this plant has so often been regarded as a symbol of eternal peace. 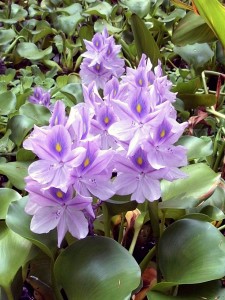 Like some other parts of Indonesia, Bali was home for big mammals such as elephant and tiger, although they no longer exist since early of last century. However, Bali still is rich of wildlife with the existence of various species of monkeys, civets, barking deer and mouse deer. There are 300 species of birds occupy the island including wild fowl, dollar birds, blue kingfishers, sea eagles, sandpipers, white herons and egrets, cuckoos, wood swallows, sparrows, and the endangered Bali starlings. The underwater world or marine life of Bali has been noted as one of the best in the world with various species such as dolphin, shark and sun fish, and some smaller inhabitants like colorful coral fish, small reef fish, and moray eels, as well as crustaceans and sponges.

The existence of these flora and fauna become necessary for the day to day life of Balinese, where ceremonies and rituals always flourish.

Orangutans
The orangutan is one of the world’s ratest primate species. Found in Indonesia only on the islands of Sumatra and Kalimantan, they are protected as a much-cared animal. Their population is carefully maintained through an animal sanctuary program.

The seas linking the many islands of Indonesia are filled with the richest marine life in the world. Proof of this fact can be observed throughout the archipelago from the Sunda Kecil Islands in the west to Bunaken off the shores of North Sulawesi and extending outward to the Banda and Aru Islands groupings in the unspoiled eastern seas. At the very botton of the ocean lie enchanting gardens. Shell and decorative rock formations provide a playground for thousand of species in a bewildering display of color.

Between the islands of Sumba and Flores lie the smaller Rinca, Padar and Komodo, which has been designated by the government as the Komodo National Park. It is here that the fearsome Komodo Dragon (“Varanus Komodoensis”) holds sway, the master of all he surveys and now maintained as a protected species. It is hard to believe that these descendants from the prehistoric dinosaurs only came to the attention of the scientific world in 1911. 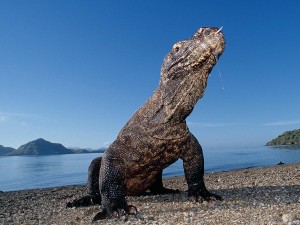 Horses are by no means rare in Indonesia. They are found throughout the islands as a means of transportation. Many are bred for racing as well. In the Manado and Tompaso, North Sulawesi, horses have become an inseparable part of the sports scene. Jockeys train their mounts in wide open spaces, often taking them down to the beaches near Manado where they are coached to run in the sand and water to strengthen their leg muscles.

The Province in Lampung in southern Sumatra is home to giant elephant herds. This amazing animal is easily trained to become familiar with the human beings. In Lampung, elephants are taught not only to do the usual circus tricks, but they are taught to play football as well. Only here can one see a robust game of “Elephant Soccer”.

Nothing quite catches the imagination of the world as the enchanting Cendrawasih, the Bird of Paradise. It can be found only in Indonesia’s most eastern province “Irian Jaya” and the surrounding islands. Local people regard it as the “Bird of the Gods”. It is classified by the “Paradiscudae” family and is strictly protected under a program of wildlife preservation. 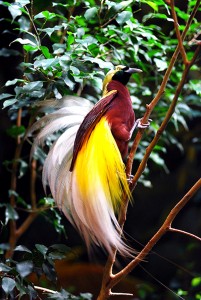 One of the most endearing small animals in the archipelago is the Kuskus, a wooly-haired marsupial found largely in the province of Irian Jaya, Sulawesi and Maluku. Its population is now carefully monitored as a rare species. This charming funny-faced little rascal makes his tail act as paws for scampering up and down the tallest trees. 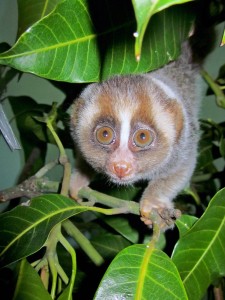