The delicious cuisine of Indonesia is as clever as it is diverse. Nothing edible in the whole outdoors escapes the cooking pot and each region puts a twist on traditional cooking processes. Unlike typical Western-style dining in courses, Indonesians eat buffet style, choosing from savory main dishes, condiments and sauces to add to rice. Cooks offer a medley of contrasts, with individual dishes falling into the spicy or mild, hot or cold, crunchy or soft, and sweet or sour categories. In rural settings, prepared food is left on the table for family members to eat when they are hungry rather than for them to dine on together.

Bali has many kinds of traditional food which are tastefully spicy as they are remarkably varied. The local food still is the main dish amid the arrival of the international fare brought by the tourism. Balinese still keep their traditional taste buds especially in a temple ceremony, Balinese birthday Otonan, or when hosting special guests. Hardly true Balinese food is served in many international restaurants due to its complicated and long hours to prepare.. Here are some of the most popular:
(Source: Bali Tourism Information 2008 book published by Bali Government Tourism Office) 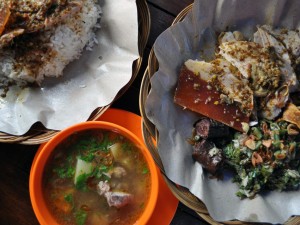 Ares, or jukut ares, is a dark yellowish soup made from a stem of a banana trunk. It is cut into very small pieces and mixed with hot spices. Some are mixed with pork ribs or duck wings. Ares can be found in many food stall in traditional markets or a Balinese restaurants.

Be Guling is a full-body roasted suckling piglet favored by a large number of Balinese. This dish is usually prepared for a temple ceremony or in a Balinese birthday party called Otonan. Be Guling can also be found in many restaurants which serve Balinese cuisine. The famous one is Be Guling Gianyar.

Bebek Betutu is a steamed duck with spices and vegetables wrapped in banana leaf. Betutu is naturally less spicy compared to other local food. Chicken betutu is a popular alteration and is getting acceptant in recent years. One famous restaurant is Bebek Bengil Restaurant in Ubud.

Brengkes, also known as tum, is one of the favorite steamed dishes. A combination of chopped pork, chicken, or duck, young jackfruit, coconut, and star fruit leaf, wrapped in banana leaf and steamed only for several minutes. Brengkes is widely available traditional markets around Bali as well as in any restaurant serving Balinese cuisine.

Jukut Urab is a favorite no-meat dish. It looks like a vegetable salad with traditional dressing. The dressing is a combination of scrapped coconut, spices and a little bit of coconut milk. Brown sugar is often added to give a sweet taste to the dressing. Fits for a vegetarian. Jukut Urab can be easily found in every Balinese household as well as in many modern restaurants.

Komoh is a traditional thick soup made from a combination of pork chop, fresh chicken or pig blood and little bit water cooked in a small pan. Best served when it is hot. Komoh only can be found in some areas in western and northern Bali when people celebrate Penampahan Galungan, one of Hindu’s auspicious days.

Lemped, also known as Pesan in some parts of Bali, is for sea food lovers. Salt or fresh water fish is wrapped in banana leaf and grilled in a few minutes. Those who opt for more spicy taste add more chili into the ingredients. Others serve Lemped with a traditional sauce called Sambel Matah. Lemped can be found in many traditional beach-side food stalls. Warung Made in Kuta, food stalls on Pantai Lebih in Gianyar, and Warung Merta Sari in Pesinggahan, Klungkung, are often referred for their tasty lemped.

Sate, grilled skewered meat, is one of the most famous traditional dishes favored by a large number of Balinese. Pork, chicken, duck, beef, or fish, the list goes on. Every parts/ villages in Bali have their own characteristic in serving Sate, the traditional ingredients, or the portion and size of Sate itself. It makes many kinds of Sate based on the meat, shape, or the ingredients. Sate can be found in many traditional food stalls around of Bali. The famous kinds of Sate can see below:

Urutan is known as Balinese sausage. Unlike a piece of sausage one ever imagines, urutan is made from meat-filled intestine, fried on boiling coconut oil. Some are dried under the sunshine before being fried.

Traditional cakes are prepared for a ceremony or social gathering such as wedding party or Balinese birthday called Otonan. Most cakes are made from rice flavor, sticky rice, or fruits. Balinese snacks are like western cereal, enjoyed in the morning with tea or coffee. Cakes are available in traditional markets and modern food stalls.

Bantal, one among the most famous, is made from white sticky rice mixed with grated coconut and sugar. Red beans or small slices of banana are filled inside of the dough. It is then wrapped in coconut leaf in square shape and steamed. Bantal can be found in many ritual ceremonies and social events. Bantal is often served as a dessert in many modern restaurants in Kuta, Sanur, or Nusa Dua.

Batun Bedil/Salak are made from rice flour mixed with coconut milk. The dough is shaped like small a bullet and then boiled, served with grated coconut and melting brown sugar. This snack is banana leaf wrapped sold in traditional markets or in modern plastic wrapper sold in superstore.

Bubuh Injin is made from black sticky rice boiled in a sweet coconut milk. It is usually served with jackfruit toppings.

Bulung, known as Balinese pudding, is made from boiled white seaweed and brown sugar. One can eat it directly or mixed in fruit salad.

Dodol is actually found in many places in Indonesia. In Bali, Dodol is wrapped in dry corn skin. This cake is made from sticky rice flour mixed with melting palm sugar. It is steamed until it looks like mud and wrapped with dry corn skin in small size.

Godoh, fried banana, is one among the most popular afternoon or morning cakes.  Dough-dipped banana is fried in coconut oil, often served with honey, godoh is usually enjoyed with coffee or tea in the morning. Godoh is served as dessert in some modern restaurant in Bali. If one like ice cream, s/he can put it above Godoh to create different flavor.

Iwel usually is found in a ritual ceremony. This soft black cake is made from steamed black sticky rice mixed with grated coconut and palm sugar. It is then pounded and wrapped in coconut leaf. Iwel usually is sold during festive holidays like Galungan and Kuningan.

Jaja Uli, like iwel, jaja uli is widely during auspicious day like Galungan and Kuningan. Tradition says such an auspicious day won’t be complete without this cake. Jaja uli is made from white sticky rice flavor mixed with grated coconut and white or brown sugar. It is then steamed and pounded to make it soft and easy to form: circle, triangle, square. Jaja uli is usually served with Tape Ketan, fermented  white sticky rice.

A ball-shaped soft cake made from rice flour filled with palm sugar.

Laklak, one famous snack in Bali, is steamed cake made from rice flour, slices of jackfruit, and coconut milk. Laklak looks like small white pancake. It is usually served with grated coconut and melted palm sugar. Laklak is best eaten when it is hot.

Lepet Bugis, is banana leaf wrapped in made from sticky rice flour filled with unti, grated coconut mixed with melting brown sugar. Best when it is served hot.

Satuh looks like a compact snow in various shapes. Satuh is made from white sticky flavor and sugar. Satuh is a dry cake and it has strong sweet flavor. One usually eat satuh with a glass of water.

Sumping, or naga sari, is a banana filled white soft made from steamed rice flour, coconut milk, and sugar, usually wrapped in a piece of banana leaf.. Sumping often be found in modern restaurant as a dessert.

Sambel Matah, raw sambal, often is referred as the best sauce to enjoy gilled or fried chicken, duck, and sea food. Fresh slices of chili, salt, and coconut oil, all are mixed together. Shrimp paste often added for a saltier taste. Sambel Matah is always an option when you order grilled food. Beachside restaurants along Jimbaran and Kedonganan are popular for their Sambel Matah.

Krupuk Melinjo is a salty fried cracker made of melinjo fruit, often served free before your appetizer. Sugar and chili sauce often is added.

Traditional beverage is one of important aspects in a ritual ceremony, produced specifically for such a religious service. Such beverage is now mass-produced and is available for public. Here are some of the most famous:

Brem is a sweet, low alcohol beverage made from fermented white sticky rice. Brem is one of three important beverages in Balinese ritual ceremonies or social events.

Tuak is a Balinese traditional beverage which contains higher level of alcohol. This beverage is made from the essence stem of various trees. If Tuak is made from stems of a coconut tree, it is called Tuak Nyuh/ Tuak Putih and if it is made from stems of Jaka treeit is called Tuak Jaka/ Tuak Gading. Based on the level of alcohol, Tuak is classified as Tuak Manis and Tuak Semedah. Tuak Manis is sweeter and contains lower alcoho. Unlike Brem, tuak is not widely marketed, because it has to be served fresh. High quality Tuak is produced in East and North Bali.

Arak Bali is known since a long times ago as an incredible liquor. Arak is colorless and contains highest level of alcohol. This liquor is made from the distillation process of Tuak. Arak is usually consumed by Balinese people who live on cold mountainous areas. Spiced Arak Ijung is widely used in a ritual ceremony and medical purposes. Unlike Tuak, Arak can be stored for years, so that is why modern companies produce this beverage for the overseas market.

Loloh is Balinese medical beverage or rather classified as health drink. Loloh is a concoction made from turmeric, ginger, greater galingale and kayu manis. Often loloh is mixed with fresh egg yolk and honey. Loloh only can be found in traditional markets.