Because of the size of the island, it is not difficult to get around Bali by various modes of transportation. The traditional types of transportation to the high class limousine are available for tourist to choose. Not to forget the sea transportation that connect Bali to some of its sister islands. However, train does not exist in Bali.

The most common way of long-distance traveling for the locals is either by bus or driving a car. Travel agents will gladly help you in reaching your destination. If you have an international license and have no problem with driving on the left lane, car rentals are also available in big cities. But if you’re just traveling in a major city, you can always hail a cab.

Train services are also available throughout Java island and most part of Sumatra island. These trains range from the major cities’ express class (medium fare, air-conditioned, comfy seating, with occasional inride movies, and possibility of sitting next to a gorgeous woman or handsome man) to rural areas’ economy class (outrageously low fare, wind-blowing through the open windows, parallel seating, and possibility of sitting next to a pack of chickens.) You can buy tickets directly at the station. But you can also reserve it in some major stations or travel agents.

In most rural areas, the locals provide a negotiable fee-based transportation service. Meaning, the cost depends on the distance and your haggling ability. So, it pays to learn Bahasa Indonesia.

They usually use compact cars, motorcycles, or becak (basically a three-wheeled bike with a seating up front, while the rider pedals it from behind). You can also find traditional transportation such as delman (a decorated four-wheeled cart heaved by horses) in some areas. Check the Land Transportation subsection on each region for more info.

Official Site of DAMRI, the national bus company. English version not yet available

Buses : there are buses for transportation between towns that relatively bigger compared to bemo. These buses connect all towns and most places of the island through local bus stations. Likewise bemo, buses also can be stopped at any point of the routes. They mostly operate day time inter island, but some are available at night for long distances within cities. Fares are between Rp. 1.500 to Rp. 10.000 per one stop point.

These different names probably apply to the same vehicles, depending on where you use them. They are usually employed on tours between city and suburbs and can seat up to 10 passengers per vehicle, sometimes even more than its capacity. Fares are not uniform, as here it does depend on distance covered by the passenger. One advantage over the bus routes is that by using these smaller vehicles you may be let off anywhere you want to, making it a slower vehicle because of its frequent stops. If you care to charter such a vehicle, you may do so, however, you should bargain for it after having obtained the right information on the approximate rates from your hotel clerk. They should cost less than hiring a chauffeur-driven car or a taxi.

Bemo : this is the most used transportation in Bali especially in the city of Denpasar. It is a miniature van with a routine route set by local government periodically. This type of transportation is good for short distance around town and cities, because of its size and passenger can get in and out at any point. Most importantly, it is cheaper compared to some other type of transportations, even though fairly slow. Price ranges usually around Rp 3,200 to Rp 4,000 per one stop over.

Taxi : Taxi is the most efficient and convenience transportation in the island. Either chartered or metered one, they are everywhere and quite inexpensive compared to some other countries. In Bali there are some different companies providing taxi services.

In most bigger cities and some towns as well, taxis are available, though only in Jakarta, Bandung, Semarang and Surabaya metered taxis are commonplace. In other cities and tourist areas one can hire cars, usually chauffeur-driven and paid by the hour or for each one-way trip. 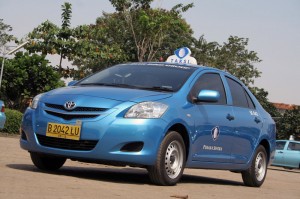 At any airport, railroad station as well as bus terminal there will be public transportation available of one kind or another. Another mode of transport is Bajaj (pronounce Bahji), a minicar tricycle seating two passengers rather tightly with its driver in the front. The rate for Bajaj should be bargained beforehand. For Taxis the flag-fall rate is various between RP 1500 – RP 2000 and for buses fare are also various from RP 700 – RP 2500 (for Air-Conditional Buses).

Here are some taxi parks:

Rental Cars, Motorbikes and Bicycles : If you plan to explore Bali in half day or full day trip, the best way is hiring a car with the driver. The average rate is from Rp 120,000 to Rp 300,000 a day depending on the type of the vehicle. There are many independent car rentals around the island. If you wish to have better services, you can go to a Travel Agent. You even can hire a tour guide of your own language. The other possibility is to rent a self drive car. An international driving license from your own country is required. This rule also applicable for motorbike rental, but in some cases you can get a temporary permit at local police office. Price ranges are around Rp. 35,000 to Rp. 50,000 per day for motorbike and Rp. 15,000 for bicycle. Likewise, a safety helmet is a compulsory when you ride a motorbike. Meanwhile, bicycles are normally available for rent at hotels. Some bigger resorts even provides bicycle tour for free including a professional tour guide.

In Bali and Yogyakarta for instance, motorcycles can be rented, usually on a daily basis, costing about US$ 5,50 (year 1996). Weekly rates are probably less. Insurance is usually covered in the rate, whereas in Bali you do not need a driver’s license and in Yogyakarta it is a small formality to issue a temporary one at a fee. 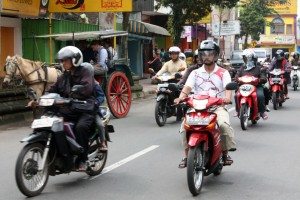 Around beaches motorcycles are also popular, so here too, they can be rented for only the day’s use. Although motorcycles are already popular at tourist spots, these individual rentals are not recommended for safety reasons. Aside from the fact that Indonesians drive on the left side of the road, like in most Commonwealth countries, it would still be unfamiliar terrain for the tourist, not to mention the local driving habits, traffic patterns and road signs. Therefore, if you prefer to stay on the safe side, use one with the drivers instead of riding it yourself, and sit behind him equipped with headgear.

Bicycles or bikes are rented in Bali and Yogyakarta on a daily basis. There is no insurance on the bike or rider, so make sure to ride carefully by keeping left most of the time. A ride to the countryside to see the pleasant and paddy fields is certainly recommended.
Curiously, bicycles at small villages are also used as “commercial vehicles”. For a small fee, the rider is the one who pedals the bike, whereas the passenger hops on the back of it. 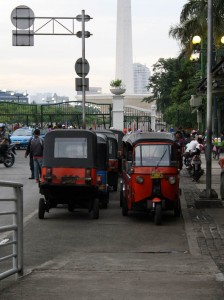 An Ojek is a motorbike hired with its rider. You may pay him for one single trip (minimum is RP 1000) or you may hire him for the day, or by the hour. Be sure to bargain beforehand. Ojeks can be found in cities and their suburbs, at intersections or at the mouths of certain sideroads. Rarely, if ever do ojek owners rent out their motorbikes without themselves riding them. Ojeks usually come in handy to go to places where roads are either too narrow or bumpy for four-wheel vehicles.

Dokar : in many areas of Indonesia, a traditional horse and cart transportation still can be found in many different versions. In Bali, this kind of transportation is known as “dokar”. Nowadays, the use of dokar is simply limited due to efficiency. In some areas dokars are even prohibited by the government because it becomes a dwindling sight around the street. A dokar ride can be a fairly bumpy and unique experience. That is why some hotels and event organizers sometime offer a dokar ride for their guests, wedding couples or special groups.

Becaks: Pronounced “baychahk”, it is a tricycle pedaled by a man who sits normally behind the passenger. It could seat two persons, however, rather tightly. Becaks are mostly found in suburb cities of Jakarta or smaller cities/towns on Java and Medan, and have been here for over four decades. Unfortunately this means of transport is no longer appearing in big cities as motorized transportation has rapidly taken over public transportation everywhere in the country. Make sure you have bargained before with the becakdriver for the agreed upon fare.

Pt. Pelni single-handedly maintains the sea transportation. Aside from that there are ferries that would help you cross between islands, such as Java-Sumatra or Java-Bali

To travel to some sister islands of Bali famous for their marine activities, local cruises is the most convenient. They normally offer a tour package including meal, activities and even a resort to stay over night. Some traditional boats are also in service for shorter distances such as to Serangan or Menjangan island.

Some regions in Indonesia allow river transportation such as parts of Sumatera and Kalimantan.

West Kalimantan’s Kapuas River (the longest one in Indonesia), for instance, provides an important mean of communication between areas.

Some rivers are also used for cultural festivities, such as Jalur Race in Riau, and extreme watersports such as Bono Riding, also in Riau.

Flying is arguably the easiest and most comfortable means of travel over long-distance in Indonesia. There are many commercial airlines running both international and domestic routes. For more information, check the Air section on your destination (region).

Garuda Indonesia, the national flag carrier, operates both international and domestic routes. Domestically it serves 33 cities, including all the provincial capitals. The only all-jet airline on domestic routes, it, has several daily flights from Jakarta to Bali, Medan, Ujung Pandang, Manado and Yogyakarta. It also operates shuttle flights to Surabaya and Semarang several times a day. 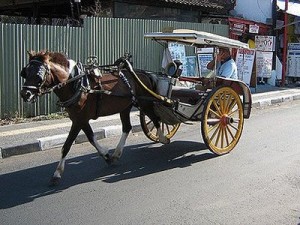