Traditional Balinese songs are called Tembang. Tembang is one of oldest arts in Bali and has been a strong part of Balinese culture. Some Tembang were sung by Balinese before the coming of Hindu-Buddhist cultures, such as Kuskus Arum, Suaran Kumbang, Puspa Pangan Jali, etc. Mostly Tembang in Bali contain many moral messages for education. Based on the structure and function, Tembang can be classified into Gegending, Pupuh/ Sekar Alit, Kidung/ Sekar Madya, and Kekawin/ Sekar Agung. 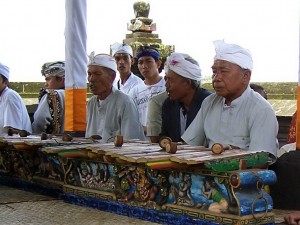 Gegending
Gegending is the simplest. It has short sentences, simple dictions, and very clear meanings. The song does not have any rules on how to sing it like the others. Mostly Gegendingan is used in children games or dances which have purpose for bonding among Balinese youth, but a type of Gegending is also used for accompanying sacred dances. Based on when Gegending is used, it can be divided into Gending Rare, Gending Jejangeran, and Gending Sanghyang.

Pupuh / Macepat / Sekar Alit
Pupuh/ Macepat/ Sekar Alit are Balinese traditional songs which has a main rule called Padalingsa. Padalingsa consist of Guru Wilang and Guru Dingdong. Guru Wilang is a rule which arrange how many words should be in a row and how many rows in a song (Pupuh). Guru Dingdong is a rule which arrange the last vocal in a row.  Pupuh is used for expressing one’s feelings or giving advice to the younger. This traditional song is sung in mostly Balinese life. So that is why Pupuh has many variation themes. Pupuh is classified based on the feeling of the singer and its intonation, seen below.

Kidung / Sekar Madaya
Kidung/ Sekar Madya is usually sung in ceremonies in Bali by a group of people and accompanied by Gamelan. Kidung themes are mostly about prayers of adoration. Kidung came to Bali from Java around the 16th – 19th century. It seems to derive from Old Javanese (Jawa Tengaan/ Kawi) which is used in some Kidung. After Kidung arrived in Bali, it was affected by Balinese culture. This influence is evident in the Kidung structure in Bali, which consists of Pangawit (opening part) and Pangawak (main part), which is not found in Java. Some famous Kidung in Bali are Wargasari, Sudhamala, Sidhapaksa, and Alis-alis Ijo.

Kekawin / Wirama / Sekar Agung
Kekawin is actually life philosophies and other Vedic lessons delivered to people through songs. Similar to Kidung, Kekawin is also sung in ceremonies. Kidung are in Sanskrit. It requires the singer to be able in the language. Kidung is usually sung by two singers. The first singer sings Kidung in its original language, sentence by sentence. After the first singer finished a sentence, the second singer will translate it into Balinese. This action will be done until the end of the Kekawin lyric. Some famous Kekawin in Bali are Saronca, Tanukerti, Girisa, Wirat, and Puspitagra.

Balinese music is based around an instrument known as the Gamelan. Gamelan or Gong, traditional musical instrument from Bali, is such a central part of Balinese music that the whole ‘orchestra’ is also referred to as a gamelan. Gamelan music is almost completely percussion. Though it sounds strange at first with its noisy, jangly percussion it’s exciting and enjoyable. It needs about 40 people to play a Gong in a complete formation (Gong Gede). Not only the men that could be the gamelan players, in Bali women can also take part of it. 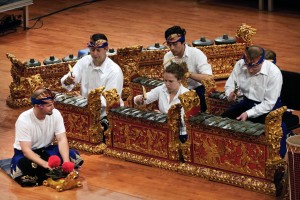 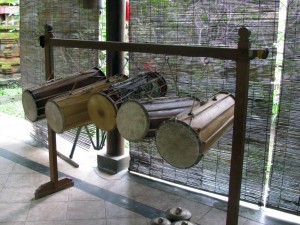 In some places in Bali, bamboo trees are so easy to be found such as in Jembrana, Bangli or Karangasem. That makes way to the Balinese artists’ initiative to produce a new music instrument as accompanier for some entertaining dances; even though they still use Gamelan as the main ensemble. This unique instrument is called Rindik or known as Jegog in the district of Jembrana. Rindik or Jegog is a percussion instrument made from sticks of bamboo. The different sizes of bamboo are rowed from the biggest to the smallest. It is bundled by root ropes on the center of a big bamboo frame. Rindik/ Jegog are played by using a couple of special bamboo sticks. Jegog is played in many small social events because it is more practical to be brought anywhere than the Gamelan which is mostly made from metal. Besides, the cost production of Rindik/ Jegog is cheaper than Gamelan. At this time Jegog/ Rindik is played in many hotels and restaurant in Bali as entertainment.

The other unique music instruments which can only be found in the district of Tabanan are Tektekan and Okokan. These wooden music instruments were first found by farmers in Tabanan. Okokan is actually a wooden bell hung around the neck of the cows and Tektekan is a handheld instrument to make noises for scaring away birds from the ripening rice paddy fields. The rhythms of those instruments later became musical instruments for performances during many temple festivals or social events in Tabanan. At this time these have become strong characteristics of the traditional music art in Tabanan. Okokan and Tektekan festivals have become a member of the Bali Tourism Festivals regularly held each year.