Traditional Balinese textiles are renowned worldwide. While admired by many for their beauty and sheer artistry, textiles also play an important part in the daily life and ceremonies of the Balinese. Textiles in Bali don’t just provide clothed, they also indicate the status and well being of the wearer. Women from royal families compete with each other to make the most beautiful creations using the most sumptuous materials.Moreover, man textiles were believed to hold magical powers, which protected the wearer against malevolent influences. They also serve as go-betweens to the supernatural world in religious rituals such as cremations, when hundred of meters of expensive clothe were turned into ashes to accompany the soul of the dead of in its passage to the other world. The guardians of the secret knowledge of textiles and like the ingredients for certain dyes and a rich compendium of sacred motifs – have always been the women of Bali. In fact, one of the most important duties of a mother is to continue the tradition by handing down her knowledge to her daughter.

Endek is a tie-dyed woven textile popular with most Balinese. Wooden hand-operated looms are used in the process of the weft-ikat method. This is where sections of the cloth are tied and then wrapped before immersing them into tubs of dye. The basic designs are irregular and soft wavy patterns. Also created are diamond designs and a zigzagging pattern. Endek is a versatile cloth for the Balinese because it can be worn for both daily use and ceremonial purposes. 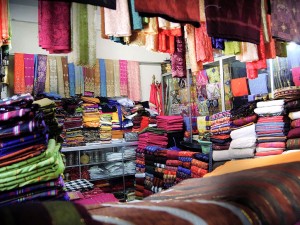 Endek can be found in many traditional markets in Bali such as:

Songket is a brocaded silk with interweaving patterns of silver and gold thread. It is classified as the ceremonial luxurious dress of all Balinese. Often the price of a Songket is over one millions rupiah (US$110). Songket is usually worn in a wedding party. This cloth is tapestry in appearance and has various motifs including wayang Balinese traditional puppet figures, birds, butterflies, flowers and leaves. The process of weaving is done on back-strap looms.

Unfortunately, Songket can neither be machine-washed nor detergent added, for its sensitive pattern and color. Therefore, when one wears this cloth he must very careful. Otherwise, one may rent this traditional cloth in some photo studios or beauty salon around Kuta, Nusa Dua, or Ubud, especially for those wishing to at least have a picture in traditional luxurious Balinese dress. Like Endek, Songket is very easy to be found in many traditional markets in Bali. 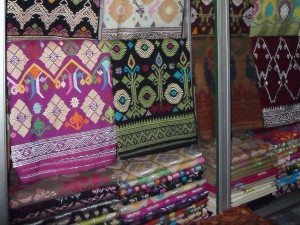 Songket is technique by which gold or silver threads are woven into the cloth or ikat. It usually comes in 2-meter lengths for use as sarongs or long scarves by Balinese women in ceremonies. Antique cloths can also be found, but are rarely in good condition. New songket of various quality are still woven in Klungkung. Quality is, of course, reflected in the price. If the item is cheap, this mean the songket is loosely woven. Remember that the best quality can cost over 3.000.000 Rupiah.

Decorating with silver or gold thread, Kain Prada is a lustrous fabric woven of cotton or silk. This cloth is usually applied for table cloth or curtain, or traditional banner in a ceremony or a social gathering. Kain Prada has various colors and motifs. One with lotus blossoms and swastikas as border decorations is the most common.

Prada cloth is identified by gold design on batik cloth. Originally the cloth was made with gold but now it is painted using imitation gold coloring, usually on polyester, for use in making fans and hotel decorations. Most Balinese dance costumes are also made of prada. A good place to buy prada is the Sukawati art market.

Gringsing is one of the rarest weaving techniques practiced, and you particularly will only find this textile in the traditional village of Tenganan, East Bali. Gringsing is also known as the ‘flame cloth’ and in this elaborate dyeing process both the warp and weft threads are carefully bound before dyeing. This creates numerous patterns that once finished they seemingly fit together perfectly and harmoniously.

Tenganan is the only place in Bali where the double-ikat process is practiced. There are only a handful of women left in Tenganan who know this practice of weaving, a threat to the next generation. A piece of Gringsing takes up to three days to weave but the finished product is superb. When you visit the village you are welcome to have a look at this weaving process or buy this traditional cloth in a fair price. Like a songket, this cloth is very sensitive to detergent or washing machine so one must hand-wash it very carefully. 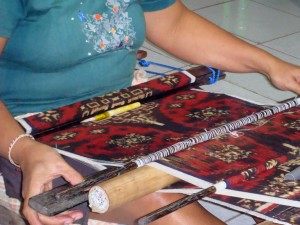 The geringsing is considered sacred throughout Bali and has always been very rare and expensive. Many stories have been told about it – human blood is said to needed in order to acquire its deep rich color. Older items sometimes come up for sale but are inevitably damaged. If you want to buy a geringsing, Tenganan is the worst place to start, as the villagers here would never sell you their sacred cloth. What is available is usually brought from outside to be sold at outrageous prices to unsuspecting tourists. There are a number of places specializing in new ikat cloths. Singaraja is north Bali renowned as home of the best ikat. Gianyar has many ikat factories with hundreds of women still weaving by hand. Sideman, on the way to Besakih Temple, also has a famous factory. If you are looking for a bargain, try Denpasar market.

Batik, the national cloth of Indonesia, has been both an art and craft for centuries, worn for some official events as well as traditional gatherings. There are two methods in producing Batik, Tulis and Cap.

Batik Tulis is a traditional method manually done by using melted wax (Balinese malam). The melted wax is painted on a piece of a cotton in several motifs by using traditional canting needle, a wooden handled tool with a metal cup and a tiny spout, out of which the wax seeps. The inventions of the cooper block or cap which is developed in the twentieth century make a big revolution in the batik productions. It became possible to make high quality designs and intricate patterns much faster than one could possibly do by hand painting. This method of using copper block to applied melted wax patterns is called Batik Cap. 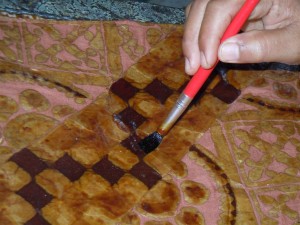 Batik has been developed not only as traditional attire but also high quality modern paraphernalia. The main batik manufacturing in Bali is in the District of Gianyar where many factories can be found and visited. You also can find modern batik clothing in many boutiques around Denpasar or Kuta.

Many people who come to Bali ask for “Balinese batik”. But in fact batik was never really made in Bali until recently, and even today most batik come from Java. Balinese batik is usually found on colorful bedspreads and sarongs with designs of anything from Bart Simpson to the Sun and Moon. If you are looking for traditional batik sarongs you should got to the market in Denpasar. You will need to check them carefully as there are many cheap print imitations.

The first kind is “warp ikat”, usually woven in silk. Found in many parts of Bali, it is usually used to make saput, outer sarongs, or the scarves worn on ceremonial occasions. The Indian patola textiles have influenced the design and motifs, which the Balinese have redesigned with more abstract patterns, creating new variations.

Certainly the most famous ikat in Bali is the geringsing, only woven in a tiny village of Bali Aga called Tenganan. Here the ikat pattern is created in both the warp and welt threads. This process, known as “double ikat”, is difficult, requiring both expertise and patience to align the two patterns.

Another traditional technique now fast-disappearing is pelangi or tie-dye. By trying off sections of cloth to prevent it from coming into contact with the dye, beautiful patterns are created. Silk cloth is usually used.