Description: Kuta is the center of entertainments and has become the favorite destination of multinational visitors. It has everything a tourist looks for i.e. white-sandy beach, rows of excellent bars and restaurants, discotheques, and entertainment spots for an enjoyable nightlife. Rows of kiosks selling souvenirs and everything a tourist need such as garments or latest CDs and cassettes are available along the main road with reasonable prices.

Location: 11 km south of Denpasar. Kuta can be easily reached by public transport from Tegal bemo station in 30 minutes. 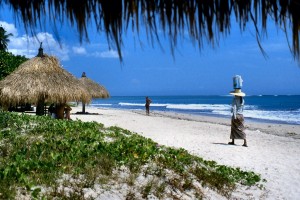 Description: Suluban Beach is one of the places of interest belonging to Badung regency. It is known for its beautiful beach along with amazing wave; best for surfing. The natural beauty of the southern tip of Bali’s highland with its hollowing waves and peaceful surroundings has attracted more and more visitors to enjoy its serenity and peacefulness.

Location: Suluban beach is one of several frivolous beaches located at Pecatu village on the southern tip of Badung District, about three km from Uluwatu temple. The beach is about 32km south of Denpasar, and can be reached through Kuta, Ngurah Rai International Airport, and Jimbaran. The sloping and bending road around the hill offers a panoramic view. 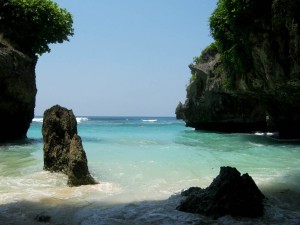 Description: Nusa Dua enclave has the most complete tourist facilities in Bali, including luxurious hotels, sporting facilities, shopping center and international convention hall, to mention a few. The empty, arid land of Nusa Dua started to develop in 1974 and the government trusted the management to Bali Tourism Development Corporation (BTDC).

Location:  The distance between Nusa Dua and Denpasar is 30 km, through Kuta to the south, 12 km from the Ngurah Rai International Airport. 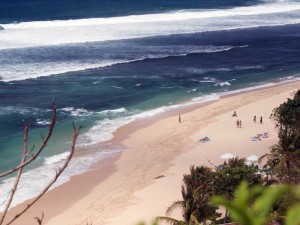 Description: Sanur has been known worldwide literally a century ago, when the deadly, horrendous battle of Puputan Badung took place on September 20, 1906 as the Dutch troops anchored here. This beach was first introduced into international community by a Belgian painter, A.T. Le Mayeur, who married a Balinese dancer Ni Polok, and stayed here since 1937 and often held painting exhibitions of his own.
The main attraction of Sanur is its calm beach. In the south east, one can observe Nusa Penida Island across the sea and in the eastern side, the panoramic view of South Bali along with its range of mountains is a spectacular sight that should not be missed. In a bright afternoon the scenery is simply beautiful.

Location: Sanur is six km from Denpasar, one can get to this beach by car, motorcycle or regular public transportation. 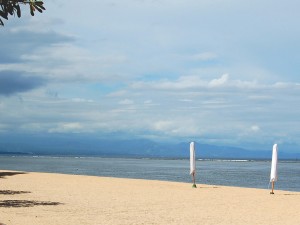 Description: Benoa is the marine activity hub of the island, for both domestic and international. Boating races are regularly held here with overseas participants hosted by Royal Bali Yacht Club, RBYC. From this harbor visitors can extend their vacation to other destinations, including Nusa Lembongan, Nusa Penida and Lombok, on their own boats or on cruises available here such as Bali Hai Cruise, The Bounty, Nusa Lembongan, to mention a few.

Location: This harbor is six km to the south from Denpasar.

Description: Padang Bai is an harbor area naturally sheltered by cluster of hills and has for centuries been serving as the island’s important sea port. Over the eastern hill of Padang Bai beach lay The Silayukti temple, built by Mpu Kuturan, one of Hindu’s most respected prophets from Java, around the eleventh century. On the western side is another temple called Penataran Agung temple, built by another Hindu holy man from Java named Danghyang Nirartha around the sixteenth century.

Location: Padang Bai is located in the sub-district of Manggis, Karangasem, 53 km from Denpasar or 30 km to west from the Eastern Bali capital of Amlapura. 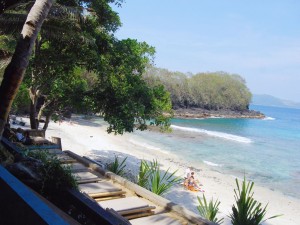 Decription: Jemeluk is a famous among underwater lovers. Crystal clear and steady water, beautiful coral layer on which various kinds of decorative tropical fish live. Other attraction include traditional salting ground along beach towards Amed, besides the breath-taking view with the towering Mt. Agung in the background, hills with valleys, the vast blue ocean adorned with rows of the fishermen’s traditional rowing boats.

Location: Jemeluk is located on the coastal area of Purwakerti Village, sub-district of Abang, Karangasem. About 101 km from Denpasar or 21 km from Amlapura.

Description: Soka is one of the most beautiful beaches in western part of Bali. Panorama view with chains of hills forms natural walls on the west side through to Batukaru Mountain Range on the north. On the eastside, Agung Mountain is seen in the distance and Indonesian ocean is on the south with the eastern tip of east Java in the backdrop.
Soka beach hides thousand of natural miracles and legends. One can find a massive coral stone with size of about 30 cubic meters surrounded by sand and sea water believed to be cooking pot of Balinese mighty man named Kebo Iwa. On the west side of the cooking pot, there is a another coral stone depicting a traditional stove about 10×20 meters in size believed as the stove on which the mighty Kebo Iwa cooked his meal.

Location: Soka beach is in Antap Village, sub-district of Selamadeg, Tabanan, 45 km from Denpasar or 84 km from Gilimanuk 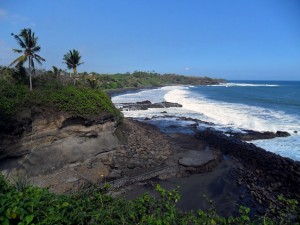 Description: Medewi is a rocky beach with fairly good waves for surfing. Its sloping part on the west with a bit receding to the south where a number of traditional rowing boats jukung tied up makes an amazing scene mainly at sunset.

Location: Medewi Beach is located about 100 meters from the Denpasar-Gilimanuk main road. It can be easily reached within one and half hours drive from Denpasar, or about 72 km. 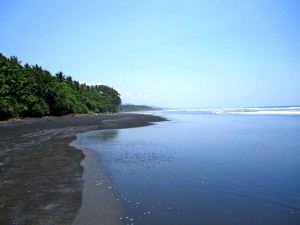 Description: Delod Brawah beach is a sloping, black-sandy beach, an ideal location for recreation and swimming. The black color comes from a natural process, especially the swampy (called Berawah in Balinese) area nearby. So then, the people who live on the north side called the newly-formed village Delod Berawah, south of the swampy area. On the north side of Delod Brawah beach is a former rice field where traditional water buffalo race called Makepung is regularly held. This is such an attraction only to be found in Jembrana.

Location: The beach can easily be reached from the sub-district of Mendoyo, Jembrana, about 88 km from Denpasar. It is about 1,5 km to the south from Tegalcangkring through extensive rice field often visited by flock of herons and storks.

Description: Perancak or Purancak is located on the southwestern coastal area of Bali, at Purancak Village. At the west tip is the legendary Purancak Temple facing west towards a river with its calm water whereas wild coastal vegetations grow on both side of the river. The ocean is just about 250 meter to the south with its clear blue water while the eastern tip of East Java is seen in the distance. On the right side of estuary are rows of traditional houses under the coconut trees with leaves waving in the breeze

Description:  Lovina, from Love Ina (Indonesia), is known for its fantastic beach, calm water, black sand, colorful coral and various kinds of tropical fish. Its calm water is an ideal location for various marine activities, such as fishing, swimming, diving, snorkeling, or just immersing in the water. Added to all these attractions is an army of dolphins in their original habitat. Visitors usually depart at dawn to watch hundreds of this friendly fish one km offshore. Lovina also has some other interesting places nearby, such as Banjar hot spring, Buddhist Vihara, Gitgit and Singsing waterfalls.

Location: Lovina beach is also known as Kalibukbuk. It covers a total of  five kilometer distance of two sub-districts of Buleleng and Banjar, consisting of six villages including Pemaron, Tukad Mungga, Anturan, and Kalibukbuk, Kaliasem and Temukus. The famous tourist resort is located 10 km to the west of the northern capital of Singaraja. 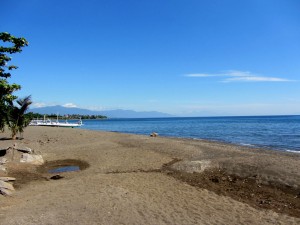