Bengkulu located in the south side of indonesia near the Equator. Bengkulu area is 19831 km2 has 19213km2 of land and estimated population 1415000 people, spread over three districts and one municipality.
Bengkulu population consists of a mixture of the Rejang Lebak, Serawai, Malay, Bugis and Chinese. Native traditions remain the grip of life Bengkulu.

Traditions here are alive, from ancient times to the present as seen in wedding ceremonies as mass dance Andua, Kejai, Gandai and traditional celebrations like Tabot. 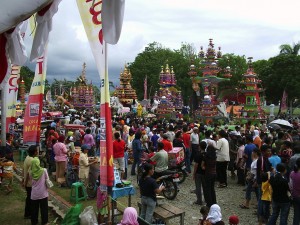 
SUKARNO’S RESIDENCE
Bung Karno, the first President of Indonesia was exiled to Bengkulu by the Dutch in 1938. Today the house is a museum, containing his books, clothes, photos and his bicycle.

FORT MARLBOROUGH
The British, or “Raffles Fort”, was built between 1714 and 1719 and was famous as the second strongest fort built by British in Asia, Fort George in Madras, India being the first. It was restored and opened to the public in 1984.

PANJANG BEACH
The long, clean, white-sand beach is good for sunbathing. There is a public swimming pool and tennis facility, along with restaurants, seaside cottages and hotels.

TIKUS ISLANDS
A group of small islands excellent for fishing, snorkeling and diving with easy access by speed boat from the old harbor in Bengkulu.

ENGGONO ISLAND
This small island is covered by dense rain forest filled with wild buffalo, pigs and cattle. The people have lived in virtual isolation for centuries, their traditional culture still very much alive today. Native art forms include the intriguing Enggano dances. The island can be reached by boat from either Baai Harbor or Bintuhan seaport.

BUKIT KABA VOLCANIC CRATER
104 km from Bengkulu and about 19 km from Curup, Bukit Kaba lies 1937 m above sea level. There are two immense sulfuric calderas with twelve active craters. Beautiful panoramic views and cool mountain air make this a pleasant stop for a couple of days. There are popular hot springs near Curup at Suban.