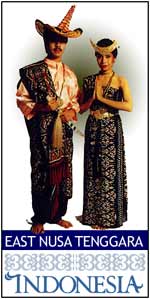 The islands of East Nusa Tenggara have been shaped by the power and force of an enormous chain of volcanoes which begins in the north of Sumatra and stretches east across Java, the legendary ‘Ring of Fire’. The province consists of over 550 islands, but is dominated by three main islands of Flores, Sumba, and Timor. Occupying a unique position at the junction of Australian and Asian submarine ridges marked by the Wallace line, it is one of the world’s most dynamic and exotic marine environments in the world. The arid landscape of eastern and southern Nusa Tenggara is the result of hot, dry winds blasting in from the Australian continent. In fact, in many coastal areas not a drop of rain falls during most of the year.

Flores is a Portuguese name, which means “flower”, and ideally describes the beauty to be found here. This long island between Sumbawa and Timor is crowded with volcanoes and mountains, dividing it into several regions with distinct languages and traditions. Predominantly Catholic and heavily influenced by the Portuguese, there are many examples of a strong European cultural heritage, like the Easter procession held in Larantuka, and the royal regalia of the former king in Maumere.

Formerly known as the Sandal Wood Island, Sumba is now famous for its horses and a superb style of ikat cloth. Spirits, both ancestral and natural, are worshipped. West Sumba is famous for its enormous megalithic tombs and traditional thatched and peaked huts raised on stilts. In credible rituals is a way of life here, such as the “Pasola”. Where hundreds of horsemen fling spears at each other in an annual traditional ceremonies, all paying homage to the spirit, take place from July to October, including the building of “adat” or traditional houses. Burial ceremonies require the sacrifice of hundreds of pigs, water buffaloes, horses, and dogs. Other ceremonies include “Pajura” or traditional boxing, festivals for the Lunar New Year in October and November, horse races and ritual dances.

Kupang
The provincial capital of East Nusa Tenggara in western Timor has approximately 522.944 inhabitants, making it the center of government, business, trade, and education. The only sandal wood oil factory in Indonesia is located in this town.

Camplong
A lovely community about 45 km from Kupang with regular market days and a natural swimming pool, where local people bathe, do their laundry, and socialize as they have for thousands of years. Camplong is also a forest reserve protecting rare animals such as the Cervus Timorensis deer and several species of parrots and monkeys.

Semau island
Thirty minutes by boat from Kupang, this unattained island paradise is well worth a stopover. The surrounding crystal-clear waters offer exceptional snorkeling and swimming. Bamboo bungalows are available right on the white sandy beach, and you can barbecue your freshly – caught dinner while enjoying a spectacular sunset.

Maumere
A port town on the northeastern coast of Flores is a good place to stopover on the way to Ende or to Larantuka. It is well connected by air with Kupang, Denpasar and Ujung Pandang, and is noted for its good beaches. The Bay of Maumere is considered the best diving spot in Flores, a paradise for divers, underwater photographers, and anyone interested in marine biology. Ledalero museum on the outskirts of Maumere has an interesting collection of ethnological objects from the region. Visitors are welcome but advance arrangements should be made. Ledalero is also home to a major Catholic Seminary where many Florinese priests are trained.

Ende
This town contains the home in exile of the first Indonesian president Soekarno during the early period of nationalist movements in 1936. The house has been repaired and is today a museum.

Mt. Kelimutu
East Nusa Tenggara’s most – visited natural wonder, and one of Indonesia’s a most mysterious and dramatic sights, is found on top of this mountain, some 66 km from Ende, or 83 km from Maumere. The spectacular view of its three crater lakes, each with a distinct color, is not only a major tourist attraction, but also the stuff of myth and legends. The lakes have continuously changed their colors over the years: today the largest is light turquoises, the next olive green and the third black. The local people go to the first when they die; the old to the second, and the black lake is reserved to thieves and murderers.

Komodo island
A small island of 280 square km, Komodo is located between the islands of Sumbawa and Flores. It is famous for its giant lizards, considered the last of their kind remaining in the world today, the Komodo dragon. Called “ora” by the local people, Komodo “dragon” (Varanus Komodoensis) is actually a giant monitor lizard. Growing up to 3 to 4 meters in length, its ancestors roamed the earth up to about half a million years ago. Komodos live on goats, deer, and even the carcasses of its own kind. The only human population on the island is at the fishing village called Komodo who supplement their income breeding goats which are used to feed the lizards. Law protects the Komodo and although they are considered harmless, it is advisable to keep them at a distance. Komodo Island is now a nature reserve, home to a number of rare bird species, deer, and wild pigs, which are prey to the lizards as well.

Larantuka
A little port nestled at the base of a tall hill at the eastern and of Flores, Larantuka has a strong Portuguese cultural heritage. The annual Eastern Procession is held in this town.

Waikabubak
An archaic little town in Western Sumba, full of old graves carved in motifs of buffalo-horns, horses, nude men and women. Symbolizing social status or the wealth of the people. There are several megalithic tombs. The front of many traditional houses are decorated with huge water buffalo horns from the animals sacrificed during rituals of years gone by Tarung village, an important ceremonial center, is located on top of a hill just a half kilometers to the west of Wakabukak.

Pasola
The most famous festival in Nusa Tenggara, Pasola pits huge teams of brightly costumed horsemen against each other in “mock” battles. The competitors are so fierce, that despite the use of blunt spears injuries and deaths are still a common occurrence.

East Nusa Tenggara has several hotels but only a small number with star ratings; most of them are one-star hotels.