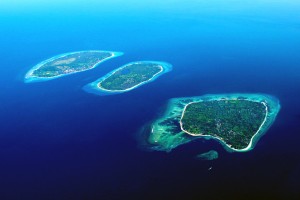 Lying a few kilometres off the west coast of Lombok just north of Senggigi beach are three isles no more than two or three kilometres in circumference. These isles are considered special because of the diversity and abundance of marine life that finds its home in the extensive coral waters that surround each of the them.

And anyone can guess what they have in common – crystal clear water, fabulous coral, no short supply of palm trees and an array of multi coloured fish. 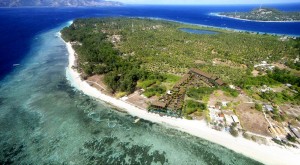 For a more total escape – Gili Meno. Here’s where you can really get away from it all on your own almost exclusive deserted island. with less accommodation possibilities, but those that it has are somewhat more up-market than you’ll in the other two islands. 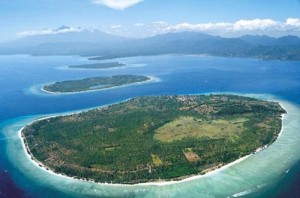 The largest and furthest flung from the mainland, is the party island. It’s the alternative to Gili Meno for those who like to party and have a good time. A foreshore strip of bars and restaurant tucked in among many simple losmen churn out music till the early hours. On the other side of the island you can relax and get away from it all. Except for few very up market hotels, prices on Gili Trawangan appeal to those for whom the creature comfort of home are what they’re getting away from.

Most divers want to see sharks and generally within a day’s diving, reef sharks which have no interest in humans are spotted. But it’s the sheer abundance of other marine life that will take your breath away; among the richest in the world with over 3.500 species. When you compare that with the Great Barrier Reef and its 1.500 species and the Red Sea with its 600 species, you realize that the Gilis are no ordinary coral islands.

The orange and white striped clown fish, the brightly coloured parrot fish and the majestic moorrish idol constitute a part of moving, living beauty. And of course there is the stationery life, the beautiful coral reefs themselves, colonies of living organisms which are continuously growing and building magnificently shaped abodes for the marine life to live among. 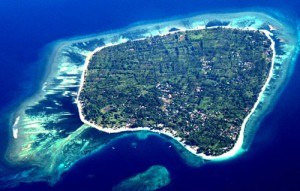 Closest to the mainland and with the biggest local population, is nevertheless quiet around your secluded hotel, but wander off to another part of the island and you’ll run into friendly kids and chickens, women carting loads of fish on their heads and men tending their coconut trees. With all that you never, however. lose the magic feeling of staying on a serene tropical island. A few bars are mixed in with the trees and shrubs, while lodging tends towards the comfortable and unwards range. A great island for families. 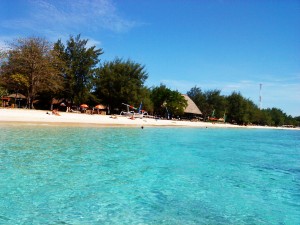 Gili Trawangan from the sky 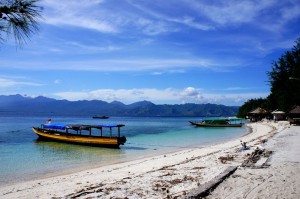 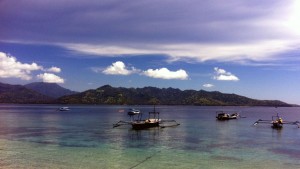