The eleventh century cave built on the hillside is one major tourist attraction close to Ubud-Gianyar road.
Besides the cave which is the key attraction, the traditional bathing pool and a number of ancient stone relics fulfill the curiosity for some mystical experience. 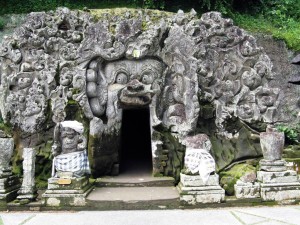 The rectangular bathing pool represents a long Balinese tradition where pools were used to be built at sacred sites, such as the holy spring.
Some impressive carvings on the entrance way to the cave welcome visitors that would like to enter the huge gaping mouth which stands to be the cave’s doorway. The unique upper jaw of monstrous rock-carved head that creates the doorway represents the earth God, Bhoma, or the widow witch, Rangda.

Literally means Elephant cave, and it is a “T” shaped cave. This was an ancient monastery of Hindu and Buddhist monks who used to meditate in the cave. It is believed that the cave was built in the early 11th century. Its face is elaborately carved, depicting a demon head splitting open the rock with its bare hand at the mouth of the cave.