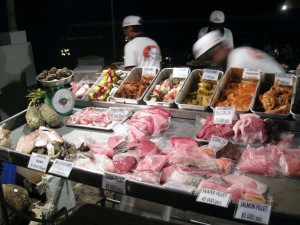 The staple food of most Indonesians is rice. On some of the islands in eastern Indonesia, staple food traditionally ranged from corn, sago, cassava to sweet potatoes, though this is changing as rice becomes more popular.

Fish features prominently in the diet: fresh, salted, dried, smoked or paste. Seafood is abundant and have great variety such as lobster, oyster, prawns, shrimp, squid, crab, etc. Coconut is found everywhere and besides being processed for cooking oil, its milk and meat is an ingredient for many dishes.

Each province or area has its own cuisine. This variation comes from the diversity of styles and ingredients used in the cooking. Spices and hot chili peppers are the essence of many cooking styles, and in some areas they are used generously such as in West Sumatra and North Sulawesi.

Some cuisine goes nationwide like West Sumatra’s Padang restaurants, Sundanese restaurants, and some Javanese dishes. You can find different types of satay, which are basically, pieces of grilled meat-on-a-cobs served by peanut sauce. Gado-gado (gah-doe gah-doe), which is a mix of fresh vegetable served also with delicious peanut sauce. Fried rice, chicken porridge, and variations of chicken and fish dishes. Some dishes come with kerupuk (kheu-roo-pook), a kind of fried chip.

Places to eat in Indonesia vary from the exclusive restaurants to food stalls popularly known as warteg (pronounced wahr-theuck). The name’s derived from “warung Tegal”, “warung” meaning kiosk while “Tegal” is the place of its origin, a city in East Java. These wartegs are popular eating-places for locals since they serve tasty food for a cheap price, although some of their sanitary methods are questionable.

Indonesians love eating. This is why restaurants and food stalls flourish almost anywhere.