Irian Jaya is a land of contrast, with some of the most impenetrable jungles in the world and snowcapped mountain peaks towering over glacial lakes. Irian Jaya is Indonesia’s largest and easternmost province and covers the western half of the world’s second largest island. It is a land of exceptional natural grandeur, with beautiful scenic beaches, immense stretches of marshlands, cool grassy meadows and powerful rivers carving gorges through dense primeval forests. The most heavily populated and cultivated parts of the islands are the Pantai Lakes district and Beliem Valley to the east.

The people of the island can be divided into more than 250 sub-groups, including the Marind-anim, Yah’ray, Asmat, Mandobo, Dani and Afyat. Those in the central highlands still maintain their customs and traditions, virtually untouched by outside influences. The different tribes have lived, for the most part, in isolation from even one another, resulting in an incredibly diverse mixture of cultures.

Traders, however, visited the coastal regions of Irian Jaya, as early as the 7th century from Sriwijaya. European traders looking for species began arriving in the early 16th century, and have left historical footprints in the area with names such as Bougainvillea, Cape d’Urville and the Torres Straits. It was the Dutch who made the most lasting impact on the island, when in 1828 they formally made Irian a Dutch Territory, which it remained until 1962.

The Provincial capital of Jayapura is situated on hills, which overlook the sea, and is accessible by boat and plane. It was here that General MacArthur assembled his fleet for the invasion of the Philippines during the Second World War. Regular flights to other major parts of the archipelago are available with Garuda and Merpati Nusantara Airlines. 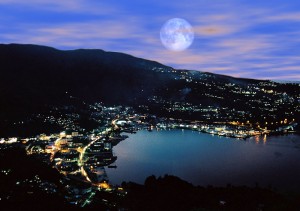 Jayapura is the capital and biggest city of this easternmost province. It is a neat and pleasant city, built on the slope of a hill overlooking the bay. General Douglas Mc Arthur’s World War II quarters still stand here. The Museum Jayapura is located on the Cendrawasih University campus. Tanjung Ria Beach, known as base G by the Allies during World War II, is a popular holiday resort with facilities for water sports. 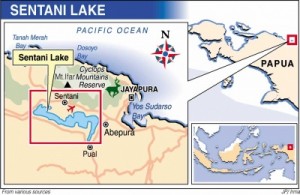 A short trip from Jayapura, Lake Sentani is still virtually untouched by tourism. The people who call the shores of this magnificent lake home still live in a traditional manner, and are renowned for their woodworking and pottery. BIAK Biak, a town on island of the same name in Cendrawasih Bay, is Irian Jaya’s gateway. It has a better infrastructure than most other places in the province. There are some good beaches on Biak island, the most popular of which are Bosnik on the east coast, which is good for swimming and sky-diving, and Korem on the north coast, where one can watch young men dive for pearls. Supiori Island, just north of Biak, has a wilderness reserve and traditional villages where visitors are welcome. 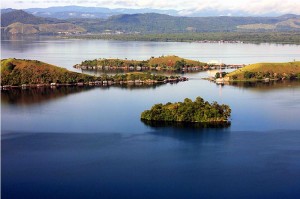 Kasuarina Cape
Named after the big casuarina trees, which grow in the area, Kasuarina Cape is just two kilometers from Sorong, on the Bird’s Head peninsula of northern Irian Jaya. Good for swimming and recreation. 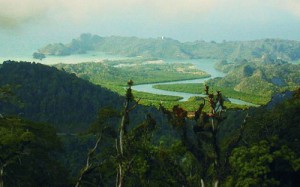