Most of Lombok has been heavily deforested, but an extensive area of forest does remain on the slopes of the huge volcano, Gunung Rinjani (3726m), and stretches for over 65km across the north of the islands. From a distance, and even visible from Bali, Rinjani appears to rise in solitary glory from the plains, but in fact the entire area is a throng of bare and soaring summits, wreathed in dense forest, Invisible fro below, the most breathtaking feature of the range is Segara Anak, the magnificient crater lake, measuring 8 km by 6km.

The Climb up Rinjani is the most energetic and, because of its sheer scale, the most rewarding trek on either Bali or Lombok. You can ascend from either Senaru and Sembalun Lawang where there is some accommodation, or climb the volcano as part of an organized tour. The trip is not for the frail or unfit and should not be attempted without adequate food or water. Although not all the treks need a porter or guide, you should definitely let somebody know where you are going and when you will be back. There are conservation offices at Senaru and Sembalun Lawang to report to when you set off, but they’re often deserted. There have been fatal accidents on the mountain and it should be remembered that this is an active volcano; Gunung Barujari in the crater lake last erupted in 1994. 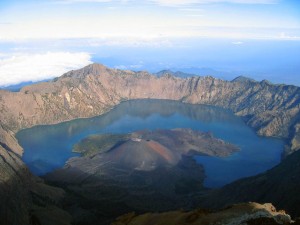 GEOLOGIC HISTORY
Rinjani is a compound volcano located on Lombok Island in the Nusa Tenggara (Lesser Sunda) Islands region of Indonesia. Its summit (elevation 3,726 m) sits on the east side of the oval-shaped Segara Anak caldera. The caldera contains a “c-shaped” lake with the east end occupied by Rombongan dome and Barujari cone. Barujari has a elevation of 2,376 m and is constructed of both lava flows and pyroclastic deposits.

Historic Activity:
The first reported historical eruption occurred in September 1847. · Fairly regular activity continued from then until August 1966 when a small new cone formed and lava flows entered the lake.

What to take
The climb is not to be taken lightly ! You definitely need good hiking boots. Once you arrive at 2700 m (crater rim) it tends to get cold and windy, so you need warm clothes. Don’t go there during the rainy season since paths will be slippery.
It’s better to have your own sleeping bags. They can be hired, but quality can be poor. Tents can be rented.

Where to start
It depends a bit on what you want to do.

Hiring guides and porters
Senaru
Most hotels in Senaru can arrange this for you. Majda stayed in Pondok Indah Cottages (20.000 Rp for a double with shower and breakfast). For their 3 day trip with 4 people they paid 350.000 Rp (coming from 450.000 Rp). This included 3 porters and a guide, as well as tents and food. Two day trips going to the rim and into the crater will be cheaper.

Sembalun
In Sembalun there’s only 1 losmen, the Pondok Sembalun along the way to Rinjani. They have 6 double rooms with bathroom and charge 20.000 Rp excluding breakfast (6/98).
It’s also possible to stay in private houses.
Another option is to start your walk up Rinjani immediately after your arrival. You can walk for about 2 hours till the first shelter where you can spend the night.

The 3-day trip:
Senaru-Sembulan-Pelawangan-Top-into the crater with hot springs-back to Senaru
-From Senaru to Sembulan, it’s a 90 minutes ride starting around 5 am.
-From Sembulan you start walking in a grassy area for about 2 hours, the top is in front of you, temperatures are OK. There’s a breakfast break. Then there’s a second 2 hour walk and another break. Finally it’s still 90 minutes to get to Pelawangan II. You’ll arrive there a bit after noon. You put up the tents there and have the afternoon off.
-Next day you get up at 3 am to be at the top at sunrise. The first hour is very steep. Once at the rim it can get very windy, and temperatures will drop. The top is at 3700 m, and especially the last 200 metres are very hard since you’re walking on volcanic sand. This means that with every step you put, you will slide down a bit. If you manage to do it, it’ll take you about 3 hours to get from the camp to the top. Afterwards, you return to the camp to have breakfast, and start packing.
-From there you go down to the Lake Segara Anak. The track is steep and slippery, so be careful. There’s a fence at certain places, but it’s not in a good state nowadays. Around the lake, there’s a camping area, and you can have a bath in the hot springs. You can have lunch there.
-After this break, you will start to climb up for 2-3 hours to Pelawangan I and down to Base camp III where you will spend the night. It is possible to camp at Pelawangan I, but there’s not much place and it’s very windy there.
– The last day is an easy 2 hours walk down.