Thirty-five kilometres east of Bali at its closest point, Lombok is inevitably compared to its better known western neighbour, although it differs considerably in almost every respect : physically, culturally, linguistically and historically. It also contrasts quite markedly for the visitor, with less widespread tourist facilities, sparser public transport and simpler accommodation.

Today the two cultures appear to coexist relatively amiable emotions below the surface-perhaps not surprising given historical events and the fact that a lot of the economic advantages of increased tourism have eluded the native Sasak people.

Measuring 80km by 70km, Lombok is slightly smaller than Bali and divides conveniently into three geographical regions. The mountainous parched northern area is dominated by the awesome bulk of Rinjani Mount National Park, at 3726m, the third highest peak in Indonesia, and until late 1994 believed to be dormant trekking at least part of the way up Rinjani is the reason many tourists come to Lombok, and it’s an easily organized and highly satisfying trip. To the south of this mass, the central platins, about 25km wide, contain the most productive agricultural areas as well as the major road on the island linking the west and east coasts. Attractive villages perched in the southern foothills of Rinjani are easily accessible from here, and many of the island’s craft centres are also in or near this cross-island corridor. Further south again is a range of low inland hills, around 500m high, behind the sweeping bays and pure white sands of the southern beaches, all of which can be explored from Kuta, the accommodation centre of the south and surfing focus of the island. Three are also several groups of islands off the Lombok coast. The trio of Gili Islands, Trawangan, Meno and Air, off the northwest coast, are the best known to tourists, long-time favourites with backpackers in search of sea, sun and sand in simple surroundings. However, those off the southwest peninsula and northeast coast are now more accessible. 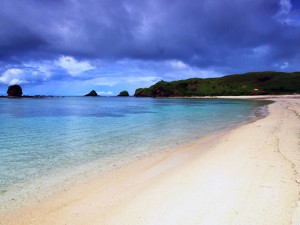 The climate of Lombok is Tropical. Lombok’s rainfall ranges from 1500 mm to 2000 mm a year, much drier than Bali, but than Sumbawa and the islands further east. Like Bali there are two seasons : dry seasons and wet season. The dry season last from May to October and the wet season last from November to April. Between these two main seasons, we have two short transitional periods. Temperatures range between 21 to 33 degrees celcius. Lombok economy is a based on agriculture, producing rice, cassava, cotton, tobacco, soya beans and chilli peppers. However, in recent centuries the island has found it impossible to support its burgeoning population, and thousands have died in famines on the islands, reportedly 50,000 as recently as 1966. Consequently, many people have left and continue to leave, to settle on other Indonesian islands as part of the government’s transmigrasi scheme. The government is also trying to moderate the island’s dependence on agriculture, and pumice is now the main export, mostly to Hong Kong. Cultivated pearls, farmed in cooperation with the Japanese, fetch over US$1 million a year, seaweed and sea ccumber are growing in economic importance, and the income from tourism is increasing rapidly.

By Plane
Mataram’s Selaparang Airport is the on the island. The only direct International flights are from Singapore. There are regular internal flights from Bali and other points in Indonesia with Bouraq, Garuda and Merpati (see schedulle)

From other Islands
The Indonesian Passenger. Pelni operates services between the islands of the archipelago, calling at Lembar on Lombok. The KM. Kelimutu calls every forthnight alternately on the Bima (Sumbawa)-Ujung Pandang(Sulawesi) run and the Benoa (Bali), Batulicin (Kalimanntan) route. The KM. Sirimau also calls on alternate fort-nighstrom (Ujung Pandang and Surabaya (Java))

All bemo trips within the four-cities (Ampenan, Mataram, Cakranegara, Sweta) area cost Rp.250-Rp.500,- and yellow bemos constantly ply to and from Ampenan and Sweta from early in the morning until late in the evening. The horsedrawn carts here, unlike the ones on Bali, have small pneimatic tyres and are called cidomo (Traditional Transportation) . They are not allowed on the main streets, covering the back routes that bemos don’t work, and are generally used for carrying heavy loads. Always negotiate a price first before getting in.

Ferries that go from Kahyangan harbor to Poto Tano harbor in Sumbawa, leave every hour. It takes about 2 hours to reach the otherpart/harbor. It starts from 5.30 Am. to 6.30 PM every day, the names of ferries are Cucut, Munawar, Darma Cakra, Nusa Abadi, and Nusa Wangi. Ferries from Sape ( East Sumbawa) to Labuan Bajo (East Nusa Tenggara) are operated twice every day.

The trip to East Nusa Tenggara (Komodo Island) is scheduled every day from 08.00 am to 2.00 PM. The routes are as follows:
– Saturday, Tuesday and Thursday, Lb. Bajo-Sape-Komodo-Lb. Bajo
– Monday, Wednesday,Friday and Sunday, Lb. Sape-Lb. Bajo

Lembar harbor (West Lombok) is chosen as the gate in Lombok island and so is Badas (Sumbawa district). Other means of transportation are :
Kelimutu Leaves Leaves every Monday from lembar to Bima
– Waingapu-Ende-Kupang-Kalabehi
Leave every Wednesday at the first week of the month. The routes are from Lembar to Badas harbor, Pelabuhan Bajo, Larantuka, Dilli, Samulaki, Tidal, Dubu, Merauke, Sorong, Fak Fak, Manokwari, Nabiri, Serni, and Jayapura v.v.

KM Awu Leaves Leaves on 12th and 26th of the month. The routes are from Lembar to Bima, Labuhan Bajo, Makasar, Mau Mau, Kendari, Kolonelake, Luwu, Gorontalo, and Bintang v.v.

Every day PT. Mabua Express takes passengers from Lembar to Benoa (Bali) v.v. The luxurious ferry can take us about two and half-hours to reach the other port.

As a Province, the autonomous region of Nusa Tenggara Barat is government by a Governor. Administravely, a governor is elected by the regional parliament and appointed by the propincial government is Mataram.

Nusa Tenggara Barat is divided into 6 districts and one municipality, they are :

The vast conurbation of AMPENAN – MATARAM – CAKRANEGARA – SWETA, with a population of around a quarter of a million, comparises four towns, the boundaries of which are all but indistinguishable to the casual visitor. At first sight rather overwhelming, the whole area measure over 8km from west to east, but a relatively straightforward local transport system allows you to get around easily. Most visitors pass through the area fairly quickly as there isn’t much to see. However, this is a user-friendly Indonesian city, with markets, shops, restaurants and banks, although if you want any nightlife other than the local cinema, you’ll have to head up the coast to Senggigi. The conurbation is essentially laid around three parallel roads which stretch from Ampenan on the coast through Mataram and Cakranegara to Sweta on the eastern edge. The roads change their names several times along their length, the most northerly being Jalan Langko/ Jalan Pejanggik/ Jalan Selaparang, which allows travel only in a west-east direction. Its counterpart, Jalan Tumpang Sari/ Jalan Panca Usaha/ Jalan Pancawarga/ Jalan Pendidikan, running parallel to the south, allows only east-west travel. The third major route , jalan Brawijaya/ Jalan Sriwijaya/ Jalan Majapahit, two-way for most of its length, skirts to the south of these, and is useful to tourists largely as the site of the central post office.

The census, taken in 1990, showed the population of West Nusa Tenggara was 3.368.699 and 2.403.025 inhabitants lived in Lombok island, which cover an area  of about 1/3 of the Sumbawa Island. So the inhabitants of Lombok  island are three times higher than total inhabitants of Sumbawa island. The indigenous ethnic group of Lombok called Sasak, inhabit the major  parts of the island. About 90 % them are Moslem. Other ethnic group is Bali. They live in West Lombok and their religions are Hindu.