Pemecutan palace was built in the 17th century in the era of Pemecutan Kingdom in Denpasar. It is one of the palaces which are opened for visitors. Managed by the modern, last king of Denpasar, Ida Cokorda Pemecutan, the royal house is completed with accommodation facilities, allowing the best way a visitor could get to get in touch with palatial atmosphere or and learn the long history of Denpasar.

Location: Pemecutan Palace is located at Jalan Thamrin No.2 Denpasar, nearby Kumbasari traditional market.
Facility: Simple tourist accommodation with an array of food stalls available just outside of the palace. 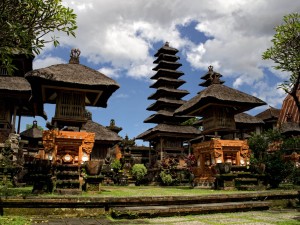 Satria Palace is located 2 km west of the Pemecutan Palace. Rebuilt in 1930, the palace boasts a big stage where Balinese dances are performed regularly and a collection of kris traditional daggers used in the 1906’s Puputan Badung War against the Dutch colonial army. A royal temple in palace area holds a regular ceremony every 210 days according Balinese calendar, featuring special dance only performed on the stage in this auspicious day.
Location: Satria Palace is located at Jalan Veteran Denpasar. Near the palace is a popular pet market Pasar Satria.

Jro Kuta Palace has the most complete buildings compared to Pemecutan or Satria, since it managed to escape from the Dutch invasion. It consists of nine buildings each has different function accordingly. The are Ancak Saji, Semanggen, Rangki, Pewaregan, Saren Raja, Saren Kangin, Paseban, Pemerajan Agung, and Pekandelan. Uniquely enough, there are several colonial statues portraying the Balinese warriors fighting against the Dutch occupants.
Location: Jro Kuta Palace is located in Jalan Kumbakarna, Denpasar. There is famous Maospahit Templenearby.

Taman Gili Kerta Gosa is a wide garden consisting of several buildings. Until 1686 under King Dewa Agung administration, Klungkung Palace was the biggest in Bali. Unfortunately the massive building was almost totally destroyed by Dutch invasion in 1908, except the gate and Taman Gili Kerta Gosa. There are four buildings and a museum within this fortunate complex. On the southern side visitors still can observe the remnant of the palace gate called Pemedal Agung, over 10 meter high. To the north of this garden is a tall building called Bale Kul-kul, housing a big traditional Balinese alarm wooden bell called Kul-Kul. To the east is a building surrounded by a pool and water lilies, called Bale Kambang, designed as a summer house for the royal family members. The jurisdiction building is located on the north east side. Semarapura Museum is right west of this complex.
Location: Taman Gili Kerta Gosa is located on the heart of Semarapura, the capital of Klungkung, 40 km east of Denpasar.
Additional facility: Traditional art market selling souvenir, food, or drink is located just across the palace. 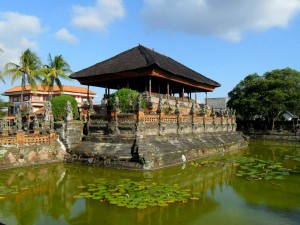 The uniquely designed Karangasem Grand Palace was built by the end of the 19th century by the first king of Karangasem, combining Balinese, Chinese and European architectural styles. Most of the buildings are set as if each floats above the pool water, with small bridges connecting one another, like a Chinese palace in general. The European influence can be seen from the design of main building, the guarding post at the front of the palace, and vast veranda called Maskerdam. The Balinese style can be seen from the entrance gate, built from red bricks with puppet, describing religious stories, as the ornaments. This combination has never been found in other palaces in Bali.
Location: Karangasem Grand Palace is located at the heart of Amlapura, the capital of District of Karangasem, 78 km from Denpasar. Accessible by public transport from Denpasar. 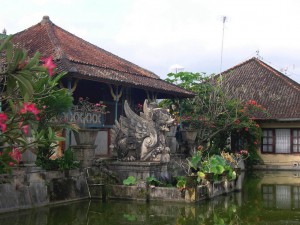 The historical Singaraja Palace is known among local as Puri Agung or Puri Gede. The old palatial library, Gedong Kirtya, is the most referred building, now designed as a literacy museum. It has the most complete collection of manuscripts about Buleleng and Bali history. This museum is located at the very front of the Palace.
Location: Singaraja Palace is located in Jalan Patih Jelantik, Singaraja, accessible by various kinds of public transports.