Standing tall at the feet of the grandeur Mount Agung in Karangasem regency, Besakih is the biggest temple in Bali. 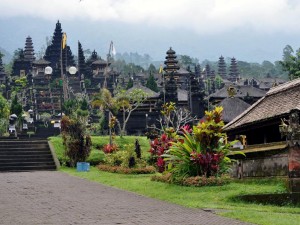 The greatest of all Balinese sanctuaries, Pura besakih, is the witness of the great natural power barely presented by Mount Agung looming above. Bali’s “mother temple” the largest and holiest temple in Bali, is over 900 meters up the slopes of Gunung Agung. It has been regarded as a holy place since pre-historic times in Bali. The first recorded mention of its existence is from an inscription that dates from 1007 A.D. Since the Gelgel dynasty of the fifteenth century it has been regarded as a central, holy temple for the entire island.
All the allegiances of the Balinese people come together at Besakih. Each regency has its own temple within the over-all compound, as do each of the caste groups.

The temple complex, about 22 temples in all, is built separately in such a distance of more than one kilometer. Its stunning look presents the harmonious combination of religion and nature. From total of 22 separate sanctuaries the three main temples are : Pura Penataran Agung, Dedicated to Sang Hyang Widi Wasa; Pura Kiduling Kreteg, dedicated to Brahma; and Pura Batu Madeg, dedicated to Wisnu.

To the Balinese a visit to the temple sanctuaries at Besakih is a special pilgrimage. Each temple has its own odalan, or anniversary celebration, and on the full moon of the Balinese month “Kedasa” the entire compound of Besakih celebrates the visit of the gods, with an enormous throng of visiting pilgrims.

Pura Pengubengan, the highest temple at the compounds, occupies an area where many ancestral temples, such as Pura Padharman, are sustained by a particular clan group.

Thousands of people from any place in the island gather around the temple complex in devoted pray to the Gods. The festival lasts for one-month long.