Beliefs, Ceremonies, Cycles Of Life And Rites Of Passages 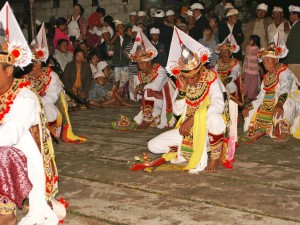 Balinese Hinduism, a combination of Indian Shivaistic, Buddhist traditions and local customs dominates the daily lives of Balinese. Those many aspects involved during its one-millennium long evolution from the fifth till the sixteenth century make Hinduism of Bali tremendously different from that of India. Hinduism and Buddhism are believed to arrive in Indonesia from India around the 4th century, known from a Yupa stone ancient inscription found in Kalimantan. Both faiths bonded with local culture to form what it is known today as Hindu-Dharma.

Hinduism-Buddhism flourished all across the archipelago in the eighth century especially under the patronage of the Sriwijaya Kingdom in South Sumatra. The golden age continued until the Java’s Majapahit Empire sovereign from the beginning of the fourteenth century till the turn of the sixteenth century when Islam arrived and pushed the Hindu aristocrat family to migrate to Bali. Thus, current Hindu Dharma is a well-balanced mixture of the Indian values and the Java’s tradition well preserved on the island of Bali.

Cycles of Life in Balinese Belief

Existence, according Balinese Hinduism, is a continuous cycle of birth, life, death, and rebirth until one’s soul is purified and thus unified with the God. You won’t be surprised to hear a Balinese says “My nephew is my grand mother reborn” and et cetera. Rebirth or incarnation, called Punarbhawa/Samsara, is one of the five chief principles of Hinduism, aiming to get Moksa the perfection and holiness of the soul so that it can be accepted in the realm of the God.

Balinese believe Moksa can be reached through four corridors, Brahmacari, Grehasta, Wanaprehasta, and Bhiksuka. Those steps have their own purposes. Brahmacari is the period for gaining knowledge as much as one can, then continued by Grehasta; period for building a good marriage without leaving knowledge, Wanaprehasta is the period for starting to leave the secular world, and finally Bhiksuka is time when one has succeed in leaving secular world and using his knowledge to help others. Before someone reaches the fourth step, s/he won’t be able to reach the perfection and holiness, and instead would go through the first step again.
Balinese people believe in the paternal system. When a woman delivers a baby, most Balinese believe that it is the reincarnation of the male ancestral. Some also believe that the baby can be from an reincarnation of the female line or even an animal. Because when an animal is sacrificed for a ritual ceremony, its soul is uplifted to be a human’s.

Ceremonies and Rites of Passages Reflects the Island of the God

In Bali, there is no single day without a ceremony. It is an obligation for human to promote balance relations among human, gods and nature. Those principles are materialized through a whole-heartily sacrifice, called Yadnya. Yadnya can be a very simple thing like giving a slice of one’s sausage to a wandering dog, or just cleaning up plastic rubbish in a temple area. Yadnya, or giving away, is the root of most ceremonies in Bali.
There are five obligations, or Panca Yadnya. Dewa Yadnya aims at thanking to the God, Pitra Yadnya to respect the ancestors’ souls, Manusa Yadnya aims at cleaning human souls, Rsi Yadnya is held when someone want to be a priest and Bhuta Yadnya aims for thanking to nature and balancing their positive and negative powers. Those Yadnya are reflected through ceremonies, but Dewa Yadnya is reflected through ceremonies more than the others.
Those hundreds of ceremonies regularly held anywhere on the island each is based on one of the Panca Yadnya. Different traditions from one village to another create more variations among places in Bali. Following are some of the most important:

Melasti
Melasti, a Dewa Yadnya ceremony, aims at clearing some temple equipments and keeping their holy spirit. Melasti is usually held one day before Nyepi/ silent day one of Hindu’s holy day in Bali. Balinese people do a small parade from their temple to the sea, carrying the temple equipments to be cleansed in the waters and return them to the temple for a prayer.

Ngaben
A Pitra Yadnya ceremony, ngaben cremation has been a famous tourist attraction for a long time. This ceremony is held by the family members when they lost one of their relative, aiming at cleansing one’s soul so that it will be unified with the God. Ngaben is a very significant, month-long prepared ceremony. In Bali, each cremation take all the village members to work together to help the family administering the whole processes of the ceremony, and therefore such a ceremony often turns into a very big happening. Tourists often are attracted when the body is put in big chest and carried by 15-50 healthy men from the house through to the grave yard. The chests take several shapes such as Lembu (Balinese ox), Gajah Mina (a big fish with elephant head), or Singa Mangaraja (a lion with two wings). Those imitated animals are believed as God’s holy animals. At the grave yard, the dead body and the chest is set on fire. This process symbolizes the return of the souls to the holy state to the God. Ngaben procession ended with the ash of dead body thrown to the nearby seawaters. 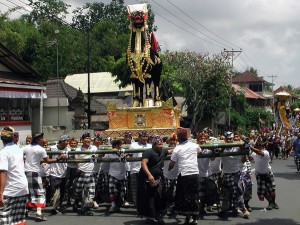 Mecaru
Mecaru is one of interesting ceremony belonging to Bhuta Yadnya ritual. It aims at balancing the nature’s positive and negative energies. In Bali, the accepted concept is that there should be a balanced relationship among the negative and positive powers to maintain a harmonious world. Mecaru can be divided into some levels, and the higher one is called Tawur Agung. For more detail about where, when ritual ceremonies are held in Bali, you may click on Village Ceremony  in this website.

Bunga
Bunga, flower, is the symbol of respect to the almighty. There are some restrictions of flowers allowed to be used. (1) Such a flower should not grow up in grave yard. (2) It must be fresh. (3) Such a flower is not stayed by bugs or another small insects. (4) No Coconut flower or meduri may be used. A coconut is instead widely used in other ceremony because it has been filled with holy water.

Dupa
Dupa, incense, is the second main tool in Balinese ceremony which has function as witness of a ceremony. Besides, Dupa is symbol of Agni, the God of fire. Unlike Chinese, Balinese incense has smaller size and it is only in stick shape.