A number of temples in Bali are well known for being the residences of monkey population. Name one is the monkey forest in Sangeh Village, 21 KM away from Denpasar. The resident monkeys are told to be the guardians of Pura Bukit Sari.

Sangeh is the village whose northern part covers about 14 hectares of a holy homogen forest of “Pala” trees with hundreds of monkey in habitants. The legendary story behind the creation of Sangeh Monkey Forest is very much related to the famous battle of Hanuman, a monkey king and general of holy Rama, and Rawana, the king of wicked giants.

The 40-m high temple was a masterpiece of the seventeenth century. 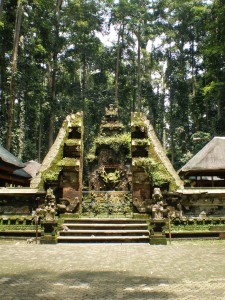 Nature Park Sangeh, maybe it has not been known by the people of Indonesia, while Sangeh located on an island that is famous in Bali Indonesia. Nature Tourism Park is located in the Village Sangeh Sangeh, Badung, Bali, about 20km from Denpasar.  The trees cannot be found on any other part of Bali and their existence in this village remains a mystery. Look for a lovely mossy temple, which is hidden amongst the tall and gracious “Palatrees”.

Sangeh Nature Park has a charm that many forest tourism inhabited by hundreds of monkeys. Sangeh monkeys previously been known for a very wild and often interfere with the visitors. Apes Sangeh also known to be very ignorant, because often pick up Brang pengunung to be returned when the monkeys were given a piece of food. But now no longer apes Sangeh wild and sejahil first, because now these monkeys have been well cared for.

Visitors here should pay attention to the warning signs that suggest you to hide the camera, jewelry, and food stuffs.

Apes Sangeh also has several groups, each group has one leader. But these groups have the leadership or teringgi practically king of the monkey king in Sangeh. This supreme leader dwelt on the most extensive. This monkey king place to live, there is a very famous temple The temple is kesakralannya Sari Bulit. 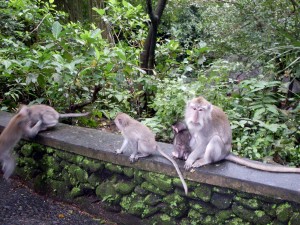 Somehow, the monkey leader chosen because it has the power and charisma that is extraordinary. Even they have rights more than other apes, such as marriage or the female monkeys received food rations. Monkey king will usually receive rations until he was satisfied first, before providing the rations to the other apes.

Most of this forest tour, a place of living apes, only a small portion of the entrepreneurs used to make a few stalls selling a wide range of souvenirs.

This tour forest overgrown with plants is a lot of nutmeg (dipterocarpustrinervis). According to information nutmeg forest has hundreds of years old, even among the nutmeg trees which are said to have lived there for more than three hundred years.

According to the manager of this Park, Forest Tourism Sangeng created as a royal park Mengwi. In order to look beautiful garden planted with a special nutmeg trees imported from Mount Agung. Actually making the park plan is finally making dirahasikan but this park is known by some people, consequently making the park was stopped, until the area was named Sangeh, which artingya anyone to see.

If we had time to visit this park, we would be interested in the beauty of the nutmeg trees that grow in the forest, because in addition to the growth of straight, nutmeg tree also has a very good wood. Yet strangely, according to several sources said Sangeh nutmeg trees can not be planted elsewhere. Until the people who want to have a tree Nutmeg wood never happen.

There are interesting things told by the visitors and organizers Sangeh Park about an old tree and would have collapsed. From the estimates many people, the tree will fall towards Pura Bukit Sari, but in reality all were off the mark. Initially the tree will be felled but no one dared for fear of a curse.

“Around the beginning of January, finally collapsed tree itself, leading to the southwest. Just between buildings and Pewaregan Kulkul Bale, so very little damage, only the outer walls alone Pewaregan. This should be surprising because the tree fell right in the temple’s main building , “

In addition to the nutmeg tree, there is still a popular plant in the woods Sangeh. Ordinary local people call it the Tree: A Question Wadon, because the bottom of the hole so the tree resembles the female genitalia, while in the middle of the growing rod hole that leads down to look like a male genitalia. The tree was growing right in the front yard and tourist attractions are actually Sangeh pule tree.

In Bali, pule tree has many features because the wood is often used for special purposes, for example, create a mask that is used as sungsungan. Society sometimes requesting that pule wood, Subawa said. But, of course should not just people taking the wood or branches that must be adjusted before her good days and give an offering as a sign asking for permission.