The village of Senaru is the main gateway to Gunung Rinjani National Park, the most popular start point for the three day Rinjani Trek up Indonesia’s second highest peak (3,726m). For the people of Lombok, Sasak and Balinese alike, the volcano is revered as a sacred place and the abode of gods. Within the spectacular crater, the Segara Anak Lakeis the destination of many pilgrims who place offerings in the water and bathe away disease in the nearby hot springs.

The cool, flower-filled mountain village of Senaru on the slopes of Mt. Rinjani streches up a hillside spur along a winding road above Bayan. It is a scenic 2.5 hours drive from Mataram or Senggigi to Senaru. The Desa includes the hamlets of Senaru, Batu Koq and Tumpang Sari, and all after accommodation in simple but pretty homestays (losmen) with lovely views.

Senaru’s best known attraction is the Sendang Gile waterfall which attracts many thousands of Indonesian and foreign visitors annually. Located about 600m above sea level, the waterfall is an easy 20 minute walk down a graded trail and steps from Senaru village. A pleasant alternative return route winds along the edge of the steep valey, following the irrigation canal. 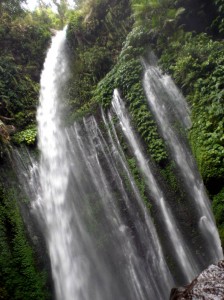 For the more adventurous, Senaru’s “Senaru waterfall” Tiu Kelep is another hour’s walk upriver fro Sendang Gile. The scramble over rocks through the tropical forest is rewarded by the beauty of the waterfall and a swim in its deep pool. It is said locally that every time you swim behind the main waterfall of Tiu Kelep you become a year younger.

With access from the main road, Senaru’s “third waterfall” Betara Lenjang is strictly for rock climbers with a local guide and equipment.

A visit to the Senaru Traditional Village, situated next to the Rinjani Trek Centre where the Rinjani trail begins, is greatly enhancedby asking a local guide to show you around. The Sasak inhabitants are the cultural guardians of the Mount Rinjani and its surrounding forest and safeguard its spiritual values. Locally guided visits included opportunities to experience the villagers’ daily life, visit their thatched houses, prepare meals using local produce, and understand their traditional way of life. 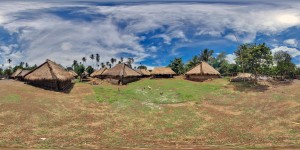