The snorkelling and diving around the islands is some of the best and most accessible in Lombok, but it may not be the way fro long. There are no moorings on any of the the reefs, so each time boats anchor, they damage them.

All the islands (Gili Air, Meno, Trawangan) are the fringed by coral reefs which slope down to a sandy bottom at around 25km, although there are some walls. Visibility is generally around 15km. The fish life here is the main attraction and includes white-tip and black-tip reef sharks, sea turtles, cuttlesfish, moray eels, lobster, manta rays, Napoleon wrasse and bumphead parrot fish. There are good snorkeling spots just off the beaches of all the islands; most of the best dive sites involve short boat trips and operators will usually also take snorkelers. Away from the currents are treacherous, so be careful. 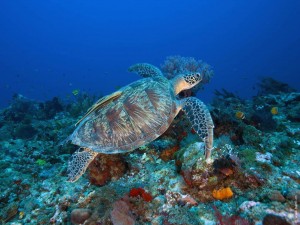 There are quite a few operators here to cater for people who want to dive around the Gili Islands, but want the comforts of Senggigi and don’t mind the additional cost and extra traveling. Snorkeling trips to Gili Trawangan are run daily by Sunshine Tours. All of the operators have offices on Senggigi’s main street and are marked on the map.

Generally the quality of the breaks is not a good on Lombok as on Bali, with the exception of Desert Point or Gili Air, but these are just too unreliable to base an entire trip around.
Most of the well-known breaks are off the south coast, with Kuta the ideal base for them. The resort’s own breaks are Kuta Left, in front os the village, and Kuta Right, at the eastern end towards Aan. There is also surf off the glorious Aan beach, a left-handler at the western adge and a left-and a right-handler in the centre. Climb up Batu Kotak to get a view of what’s happening on the reef.
West of Kuta, most of the bays are worth a look, although they vary in accessibility, and the surf is erratic. Around the headland, at Selong Belanak there’s a good left-hander, best in the dry season. Further west, Blongas is less accessible, but has three good breaks, a left-hander in the east, a right in the west and another left in the centre. You’ll need to charter a boat from the village to get here, or it’s good spot to anchor overnight on a longer charter, but you’ll have to be a shark breeding ground. 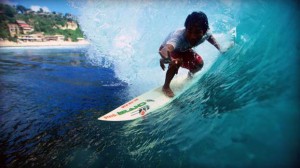 East Kuta, the best but the most inaccessible, breaks are off the coast of the south-east peninsula near Serewe. There’s a good right-hander and another about a mile to the west, but you’ll have to come by boat. With more breaks just inside the southern headland of Awang bay, as well as further into the bay, it makes sense to base yourself at Laut Surga for this area. You can charter boats from Awang on the west side of the bay to get out to the right-hander on the reef just south of the village. Gumbang Bay, which some people call Grupuk Bay, a short drive from Kuta, has the potential for big waves at its shallow mouth, plus smaller ones in the middle and the east of the bay.
The world famous break on Lombok is Desert Point off Banko-Banko, a fast left-hander with tubes that is the best from June to September. The area is difficult to get to by road and there are no facilities there at all. The best option is to charter a boat, with sleeping facilities, from Bali, Elsewhere around the island, Gili Air’s Pertama is a renowned though erratic right-hander, Senggigi offers a couple of breaks and there area several accessible from the beach of Labuhan Haji.