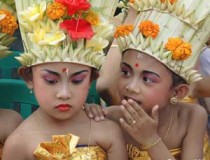 Bali’s population of over 3,000,000 souls spread over the whole island, including those in the smaller islands of Nusa Penida, Nusa Ceningan, Nusa Lembongan, Serangan and Menjangan Island. The overwhelming majority of Balinese are Hindus, with the increasing number on non-Hindu migrating from the closest neighboring islands of Java and Lombok. The coastal areas in the south are the most populous area with over 370,000 people living in various professions in the capital of Denpasar. Farming has been the primary way of living in Balinese life. Where […]