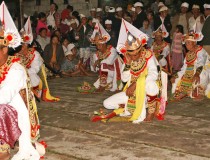 Beliefs, Ceremonies, Cycles Of Life And Rites Of Passages (Source: Bali A Traveler’s Companion and Bali Tourism Information Book 2008) Balinese beliefs & its history Balinese Hinduism, a combination of Indian Shivaistic, Buddhist traditions and local customs dominates the daily lives of Balinese. Those many aspects involved during its one-millennium long evolution from the fifth till the sixteenth century make Hinduism of Bali tremendously different from that of India. Hinduism and Buddhism are believed to arrive in Indonesia from India around the 4th century, known from a […]