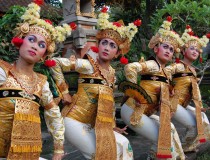 Traditional Balinese dances are the oldest form of performing arts in Bali. Traditional dances can be divided into two types, sacred dance called Wali and entertainment dance called Bebalihan. Wali (sacred dance) is usually performed in some ritual ceremonies only because it has strong magical powers and only can be performed by specific dancers. Bebalihan are usually performed in social events. In addition to entertain, Bebalihan also has other purposes such as: welcoming guests, celebration of harvests, or gathering crowds. Bebalihan has more variations than Wali.