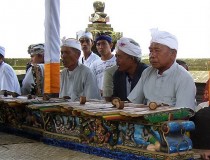 Traditional Balinese Song Traditional Balinese songs are called Tembang. Tembang is one of oldest arts in Bali and has been a strong part of Balinese culture. Some Tembang were sung by Balinese before the coming of Hindu-Buddhist cultures, such as Kuskus Arum, Suaran Kumbang, Puspa Pangan Jali, etc. Mostly Tembang in Bali contain many moral messages for education. Based on the structure and function, Tembang can be classified into Gegending, Pupuh/ Sekar Alit, Kidung/ Sekar Madya, and Kekawin/ Sekar Agung.