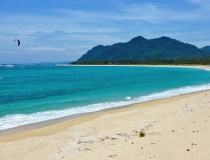 Aceh, at the northwestern end of Sumatra, was the first are in Indonesia to have significant contact with the outside world. Chinese chronicles of the sixth century speak of a kingdom called Po-Li on the northern tip of what is now Sumatra. In the 9th century, Arabic and Indian writings mention Aceh as an important trade center. The first Islamic Kingdom in Indonesia was established in 1804 in Aceh, and the region’s position as an Islamic stronghold grew as the city became a center for Islamic learning […]