Built in 1634, the temple is the only temple complex exposing the Balinese traditional building structure, Meru. Taman Ayun, means beautiful garden, located in the village of Mengwi, 18km west of Denpasar, is indeed one of Bali’s most picturesque temples. The King of Mengwi, I Gusti Agung Anom, built is stately proportioned courtyards and large surrounding moat in the year 1634. Containing both the Royal family ancestral shrines and the strayed Meru shrines to the major deities, Taman Ayun became the main temple for the ancient Kingdom of Mengwi. The temple is surrounded with its beautiful lotus garden. The whole temple complex seemingly pictures the Mount Mahameru floating on a milk pond.

“Taman Ayun” literally translated means beautiful garden, and this temple, situated in the village of Mengwi, 18 km west of Denpasar, is indeed one of Bali’s most picturesque temples. Its stately proportioned courtyards and large surrounding moat were built in the year 1634 by the King of Mengwi, I Gusti Agung Anom. 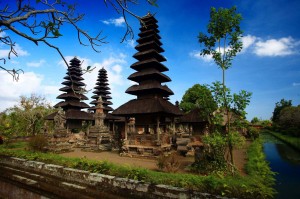 Containing both the Royal Family ancestral shrines and the storeyed Meru shrines to the major deities, Taman Ayun became the main temple for the ancient kingdom of Mengwi, Every 210 days, on Tuesday Kliwon Medangsia (according to the traditional Icaka Calender), the entire lokal populace gathers at the temple to worship, celebrating the temple’s anniversary.

The Pura Taman Ayun complex is divided into four distinct areas, each higher than the other. The first of these courtyards, known as the jaba, is just across the moat, and must be reached by the one and only bridge. Here can be found a small shrine, protecting the entrance to the temple, and a large open wantilan hall where performances and cock fights are held on ceremonial days.

The path the first courtyard passed up throuht an elevated split gate and there, on the eastern side, is a small complex of shrines known as Pura Luhuring Purnama. Opposite this, on the western side, is a large open resting hall and a small pond with fountains on all sides. 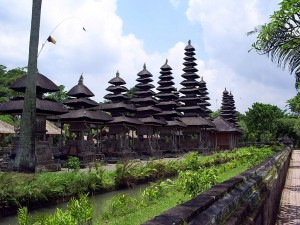 Seen from a distance, Pura Taman Ayun indead seems to be afloat, an island of serenity. Its majestic pagodas, stately ways and expansive grounds speak of days gone by, and the colorful royal pageantry that is an intrinsic part of Bali’s culture.