The holy spring which bubbles up in the inner courtyard of the Tirta Empul Temple in Tampaksiring is believed to have magic curative powers, and throngs of people visit the special bathing pools where clear cool water spouts from mossy walls. Legend has it that the God Indra created the spring, piercing the ground in search of holy water. 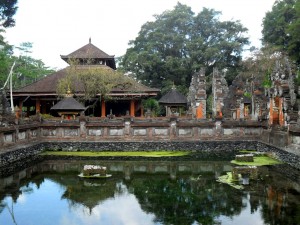 The name of Tampaksiring comes from two words on Balinese language, “tampak” (means palm) and “siring” (means tilted). It is said, according to a legend recorded on palm leaves USANA Bali, the name comes from the former footprints of a king named Mayadenawa. King is clever and powerful, but unfortunately he is anger. He considers himself a God and ordered his people worshiping him. As a result of nature’s Mayadenawa, Batara (= God) Indra was angry and sent his armies. Mayadenawa run into the forest. In order for the pursuers lost track, he walked with her feet tipped. That way he hopes his pursuers do not recognize the trail feet.

However, it can also be caught by his pursuers. Previously, he was with the rest of his power to have created a poisonous spring that caused many deaths his pursuers after they drank the water from these springs. God Indra created the spring and then another as the antidote to the poisonous water which then named “Tirta Empul” (“holy water”). Forest area through which the King Mayadenawa by walking while the feet tilt is familiar with Tampaksiring.

This palace stood on the initiative of President Sukarno, who wants a resting place away from the cool weather of the city, suitable for the President of the Republic of Indonesia and their families as well as for state guests.

The architect was R.M. Soedarsono and this palace was built in stages. Tampaksiring Palace consists of four main buildings namely Wisma Merdeka area of 1200 square meters and House Yudhistira 2000 square meters area and common room. Wisma Merdeka and Wisma Yudhistira is the first building that was built in 1957. At all the construction finished 1963 with the establishment of the Wisma Negara and Wisma Bima. 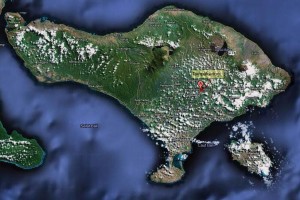 This place is a heritage monument will be very valuable; it is because his background, and also this place is used as a stopover palace State leaders who were stopped in Bali. Also the most important is the Pura that often used for Balinese for praying, and the public baths (Tirta Empul). The waters are believed to have magic curative powers. Every year people journey from all over Bali to purify themselves in the clear pools. After leaving a small offering to the deity of the spring, men and women go either side to bathe. On the full moon of the fourth month each year, the villagers from nearby Manukaya take a sacred stone to be cleansed at Tirta Empul. 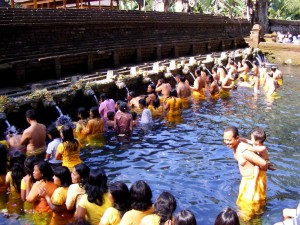