Carved out of the landscape by tides, wind and rain, the huge offshore sentinel rock of Tanah Lot supports a small picturesque sea temple which can be reached by a scramble over the wet rocks. There are reputed to be several large caves just below the water line at the base of the rock which shelter large sea-snakes, the guardians of temple. 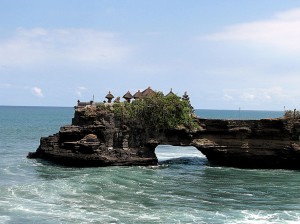 According to legend, this temple was built by a Brahmana who wander from Java. He is a Danghyang Nirartha who successfull on strengthens the Hinduism for Balinese and building a Sad Kahyangan at the 16th century. The king of Tanah Lot, Bendesa Beraben, jealous with him because his followers began to leave and follow Nirartha. Bendesa Beraben ordered Nirartha to leave Tanah Lot. He agreed, and before leaving Tanah Lot, with his strength he was move boulders into the middle of the beach (not into the sea) and build a temple there. He also transformed his shawled into a snake as temples guard. This snake is still there until today and scientifically, the snakes including sea snakes that have a characteristic flat tail like a fish, striped black and yellow and has 3 times more powerful toxins from cobra snake. End of the legend states that Bendesa Beraben ‘finally’ became a follower of Nirartha. 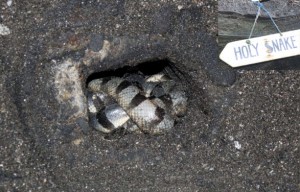 Tanah Lot is located in the village Beraban Kediri Tabanan District, about 13 km west of Tabanan. Tanah Lot Temple on the north side there is a temple located on top of the cliff that jutted into the sea. This cliff temple connect with the land and shaped like a bridge (arch). Tanah Lot, famous as a beautiful place to watch the sunset, the tourists are usually come in the afternoon to see the beauty of the sunset here.

From the parking area to the temple area, we can see so many art shops and food stalls or just a tavern. Also available is a clean toilet that the rent is cheap enough for even domestic tourists pockets.

Odalan or Temple ceremony is celebrated in this temple once every 210 days, the same as pretending to be another. The ceremony time is near to the celebration of Galungan and Kuningan is precisely on Holy Days Cemeng Langkir Buda. At that time, people who pray will pray at Temple is crowded.