Press Release: Visit of the Minister of Tourism and Creative Economy to Tokyo, Japan March 29, 2013 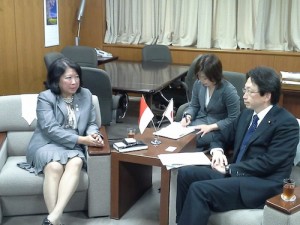 The meeting was held in a warm and positive environment. The Ministers discussed bilateral developments and reflected on the positive growth in bilateral trade, investment and tourism flows, as well as cooperation in the creative industries.

They agreed on the importance of the role of trade in growth, development and job creation. They discussed the future of the multilateral trading system of the World Trade Organization (WTO), whose term of office of its DG would expire on 31 August 2013.

Minister Pangestu, Vice Minister Suzuki, and Vice Minister Taira concurred on the importance of continuing to strengthen the rules based framework of the WTO and making progress on the multilateral negotiations. Both agreed of the need for stronger political will to guide Geneva negotiators to ensure deliverables at the 9th WTO Ministerial Conference in Bali this December as early harvest especially on trade facilitation, in order to generate momentum and to move on to completing the Doha Development Agenda after the Bali meeting.

They also recognized that different approaches trade opening such as through bilateral and regional agreements as well as a plurilateral agreement such as the one on services currently being discussed, can be viewed as positive progress. That is, they need to be managed so that they remain consistent and complementary to the multilateral trading system. 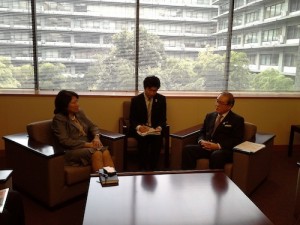 During her one-day hectic official visit to Tokyo, Minister Mari also addressed the Japan National Press Club, and visited the offices of the Mainichi Newspaper and Nikkei Newspaper. Minister Mari also met H.E. Yasuo Fukuda, former Japan Prime Minister who is also the President of Japan-Indonesia Association to exchange view and receive inputs regarding her candidacy as the Director General of the WTO.

Minister Mari also discussed with Chairman of Keidanren, Mr Hiromasa Yonekura, as well as some think thank organizations about the importance of the commitment to a global rules-based trading system, which is the ultimate goal of the WTO. In this regard, Minister Pangestu highlighted the relevance of WTO in the international trade and the importance to safeguard and monitor global rules. The simplicity of a single framework for global trade, standards and rules is key to ensuring all countries, developed, and developing countries, including small countries and all companies, including SMEs, can participate in global trade. It will also be important for the efficient functioning of the global value chain.

Dr. Pangestu, who served as the Minister of Trade of Indonesia from October 2004 to October 2011, is convinced that a multilateral trading system is a solution to many problems worldwide. “Since its creation, the WTO has helped generate more trade, more growth, more jobs, and more opportunities in the world”, Dr. Pangestu said.

“Above all, it has lifted people and nations out of poverty”.

Minister Pangestu is one among four ministers who are candidates for the DG of the WTO. Other than the four ministers, there are five other candidates who are in the race. If elected as the new Director General, Dr. Pangestu would be the first woman to hold the position since the creation of the WTO.

Based on her experience, she understands the importance of inclusion and would ensure that the opportunities from global free trade benefit everyone, men and women, in developed, least developed countries and developing countries, for big business and SMEs.