That is to encourage appropriate and sustainable tourism, one that reflects the strengths of the local culture, history and natural environment. The method to bring this about is to decentralize planning and decision making to the maximum extent possible.

The attractions and locations of community and village based tourism in Indonesia consist in the following number:

Villages in District of Badung

The Mengwi Kingdom administration born in 1634 grew to be among the island’s most powerful political power until 1891, where a disastrous war dissolved the palace, but the temple survives. Today visitors can observe the wonderful temple complex, Taman Ayun, built during the Mengwi heydays, with its massive garden and pool. A museum called Manusa Yadnya, human rites of passage, nearby has a collection of works depicting a complete set of Hindu ceremonies since a baby is carried in the mother womb until he dies.
Location: This village is located in North Badung, 15 km north of Denpasar.
Facility: traditional food stalls, souvenir shops, and public transports.

Villages in District of Gianyar

The term Batubulan, moon rock, was taken from a stone shaping like a moon, discovered by Dewa Agung Kalasan, an adopted son of a local king, when he cleared a jungle to build his palace. He decided to name this area Batubulan. Now the stone is well kept at the royal temple nearby the palace. Batubulan is worth noted for their dances and sculptures. The famous Kecak and Barong dances are performed daily.
Located: Batubulan belongs to the sub-district Sukawati, Gianyar, 10 km east of Denpasar.
Facility: Traditional food stall, painting and handicraft galleries.

In the thirteenth century Mas was governed by an evil king Sri Aji Astasura Ratna Bumi Banten, and so did his followers. The evil practice lasted in the following centuries until Java’s powerful army arrived. A new king, Manik Mas, was installed. To make the area free from the bad past habit, a purification ceremony was administered, Punyan Tangi tangi tree was planted. The tree still survives today in the inner court yard of Pulemas Temple Mas villagers are mostly sculptors, producing ones from stone, wood, and porcelain.
Location: Mas Village is located in Gianyar, 20 km east of Denpasar.
Facility: visitors can buy kinds of statue or the other handicraft in the art galleries around the village.

The name of Sebatu, according Usada Bali manuscript, is taken from a legend called Mayadenawa. The self-proclaimed god, Mayadenawa made all the people to worship him until he was defeated by god Indra and ran away into a jungle, transforming himself into various kinds of creatures until he slipped on a stone and died. The location was then called Sauhbatu, or Sebatu as it is known today (sauh for slip and stone for batu).
Most Sebatu villagers are sculptors and farmers. Most sculptors work in their front yard and sell the statues directly to customers. Beautifully arranged rice fields dominate right and left side of the main road leading to a village temple with a bathing spring nearby.
Location: Sebatu and Pujung Villages are north of Ubud, 38 km from Denpasar.

Another art village, the densely populated Peliatan is home to famous artists such as Wayan Gandra, Made Lebah and Rudolf Bonnet along with several painting museums and many art galleries. Traditional dance or gamelan orchestra classes are available. An afternoon walk along the pristine village is a good past time.
Location: Peliatan Village belongs to the sub-district of Ubud, Gianyar, 22 km from Denpasar.

Celuk is the right destination for gold and silver lovers, where its main road is adorned with many gold or silver galleries in traditional or modern buildings. Good quality gold or silver accessories in unusual designs and fair pricing, some even made to your order, if you have your own design.
Location: Celuk village is located in main road five km East of Denpasar

Villages in District of Bangli

The name of Batu Kaang, meaning hill of rock, refers to the location it was built. The village is perched 1,150 meters above the sea level on the rocky hill. Batukaang villagers keep their pre-Hindu megalithic rituals along with the modern Hindu’s culture, a cultural mix. A beautiful view from atop with mild temperature.
Location: Batukaang Village belongs to the sub-district of Kintamani, 35 km from Bangli.

The name of Trunyan, from Taru means tree and Menyan means substance of good smell, was taken from the sweet smelling Banyan tree occupying its cemetery. Trunyan village is squeezed tightly by the Batur Lake and the outer ridge of Mt. Batur. Trunyanese were indigenous Balinese who were “driven out” to this present location as modern Balinese arrived from Java’s Majapahit empire, themselves were driven out by the arrival of Islam.
Unlike modern Balinese who cremate a dead body, Trunyanese simply arrange them under the Banyan trees, the smell of which prevents the bad odor from the decomposing remains. After awhile, a certain ceremony follows and the skull of the dead is joined with others on the altar nearby.
Location: Trunyan village is located across of Lake Batur, sub-district of Kintamani, Bangli, 65 north of Denpasar. Visitors usually rent a boat or traditional yacht which can be found around Batur Lake 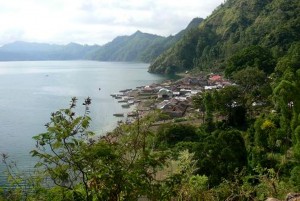 Villages in District of Klungkung

Tihingan Village is known as the producer of Gamelan, traditional music instruments made from bronze or copper, used for escorting Balinese dances and some ritual ceremonies. The villagers are descendant of Pande family, those experts in metal related business. Tihingan’s gamelan is a well-known brand nationwide, for its special tone and appearance. Visitors can learn to play it at Gamelan studio around nearby the village temple.
Location: Tihingan Village belongs to the sub-district of Banjarangkan, Klungkung, 3 km west of the capital Semarapura.

Kamasan Village is known from its puppet paintings and silver and chopper handicrafts. The Balinese puppet, Wayang, is a media for religious education as well as mode of entertainment, through its epic stories. The Dutch colonials discover this painting technique as unique for its natural color and distinct style, never been found in any other art village on Bali. Egg paintings were first developed here. Kamasan also produce silver or chopper households engraved with puppet painting characters.
Location: Kamasan Village is located 1, 5 km south of Semarapura. Traditional horse-drawn chart Dokar is a popular transport in this village.

Villages in District of Karangasem

Tenganan is one of two indigenous locally known as Bali Aga, the beginning of Bali, driven into the mountainous interiors when modern Balinese arrived from Java by the end of the fourteenth century. Tengananese developed their distinct culture, combining pre-Hindu megalithic tradition with the Hinduism. Most houses are made from concrete bricks roofed with dry grasses called Somi. Girls must marry a local boy. A married man carries Keris traditional dagger whenever he goes outside of their housing compound as a symbol a family guardian.
Tenganan is also known for the distinct double ikat weaving, kain grinsing, and the annual celebrated friendly yet bloody battle Perang Pandan, usually held in June. 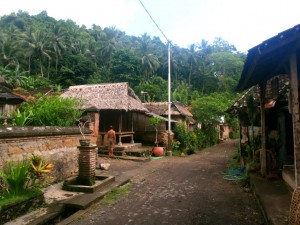 Armed with a handful of pandanus thorny leaves, two fighters enter the ring with a singe aim, wounding his opponent body as much as it causes “blood to drops on the dance floor”. This dance prepares young lads to be strong guardians for their village, which they believe a sacred land compared to the rest of Bali. An elder man acting as a referee will only stop the fight when a fighter is wounded and blood runs down falling to the ground.
Located: Tenganan Village accessible from Candidasa, a popular destination in Karangasem, about 70 km east of Denpasar. 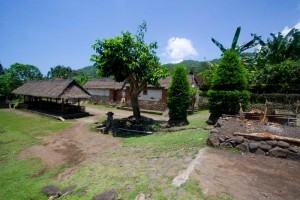