Indonesia offers tourists absolutely unique collection of the most beautiful waterfalls in world. Unlike the rest of the world Indonesia rich with rare gifts of the nature and each regency (including Bali) has tens of sites that you will never forget. Here are some of them: 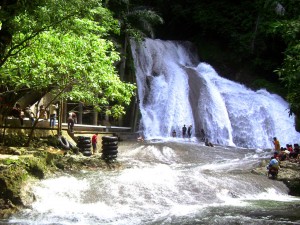 Sipiso-Piso waterfall (North Sumatra)
Tongging is a place to see a waterfall surrounded by beautiful sights in cool mountain air. It is 24 km from Kabanjahe, located at the north side of Lake Toba. The 360 feet waterfall is visible from a gazebo at one top of a hill 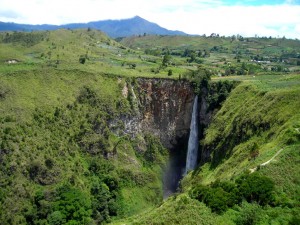 Yeh Mampeh waterfall (Bali)
Yeh in Balinese means water and mampeh means flying, so this waterfall on the eyes of the villager of Less is seen as a flying water. Indeed this waterfall is one of the highest waterfall in Bali. It is situated in the Pura Village just before the Pura Subak, which is a temple of life giving water of the traditional irrigation organization. Just keep away from near the middle of the fall, since the power of the water hitting the body is so powerful that hurts. 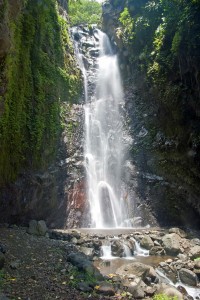 Jukut waterfall (Lombok)
In Tetebatu on Lombok there is a local waterfalls called “air terjun Jukut” which is also called “Jeruk Manis“. It is advisable to take your belongings along with you when you visit the waterfall. 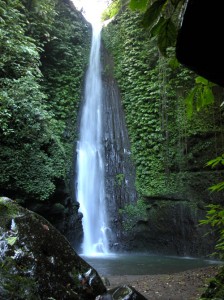 Colo waterfall (Central Java)
Colo is a mountain resort 18kms north of Kudus, high on the southern slopes of Mt. Muria. Another waterfall 1.5 kilometers north of Colo is the Monthel. A mountain resort near it contains the tomb of Sunan Muria, one of the nine Moslem saints in Java. On Friday “pahing” of the Javanese calender, the grave is visited by pilgrims from neighboring regions 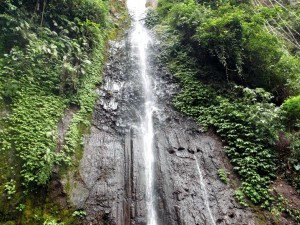 Nungnung Waterfall (Bali)
A small village about 40 kilometers north of Denpasar at about 900 meters above sea level. At this village, a 50 meters high waterfall can be found as well as expansive rice terraces just around the road intersection to the waterfall and should walk about 2 kilometers off the beaten track and pass through lush green trees and plantations. 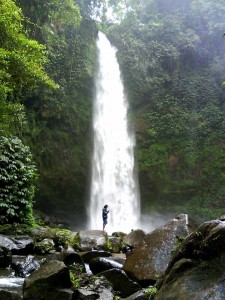 Gigit Waterfall (Bali)
To the south of Singaraja is Gitgit Waterfall, Bali’s highest waterfall. This beautiful wilderness area is a must for nature lovers who want to get away from the hustle and bustle of the larger towns. This is a perfect place to take photographs of Bali’s magical scenery. 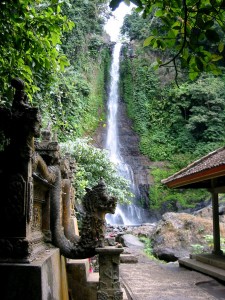